Epilog - When Calvin lost his Hobbes

Share All sharing options for: Epilog - When Calvin lost his Hobbes

I wrote this last December but never published it. I wish the original ending was still true.

Tweny one years ago as I was approaching my 28th birthday I was recently divorced, lost all our mutual friends in the divorce, and had a cynical view of life that manifested itself in sarcastic one-liners that shockingly put off most people. At that point I had few friends and wasn't very interested in making new ones.

At work a tall lanky guy had joined the company and after a first impression on both sides the  idea that we would become friends seemed far fetched.  The only thing I knew about him was that he hated Tom Lasorda and my Dodgers, and to make it worse was a Yankee fan.

For a while we paid little attention to each other and as our jobs didn't really mix we rarely had interaction, however  we had a mutual friend who was determined that we be friends. She kept inviting us both to lunch until finally one day to make her happy we all went to lunch.

That first lunch started our lifetime friendship. I didn't quite know what to make of him but I did enjoy the conversation. Turns out he was Bill Maher before Bill Maher was potty trained. Our combined disdain for the world made for cynical heaven.  It was enough of a connection that we had lunch again and again and from that we created a friendship that still stands large today twenty something years later. It was a bizarre friendship that had some huge obstacles to overcome.

He was 12 years my senior

He was tall and I'm short, and my first inclination is to dislike tall people.

He was a chain smoker; I'd stopped smoking when I was 16.

He was a huge drinker who was most comfortable in bars and with the people who frequented them.  I didn't even go into a real bar until I was over 25.

At the age of 17 he was the state Tennis champion  in Kansas, and a graceful athlete. I'm a short stout guy who got by more on tenacity then on athletic skill,  and  grace was never part of my repertoire.

Upon graduation from HS, he and his best friend used the buddy system and joined the Army to fight a war in a country they had never heard of. I never served my country in any capacity and didn't understand why boys would go off to war to kill or be killed without understanding why.

He was a huge Raider fan. I hated them.

Worse of all he hated Tom Lasorda and my Dodgers.

Those were the differences but we had fun together.  He was deeply intelligent and could see right through people. Vietnam had taken it's toll but he managed his life as best he could. We talked sports, played sports, talked about books, politics, and watched sports, and admired woman. For two years he was my MNF companion back when I cared about football.  Just about every day for two years we had lunch together and the routine was always the same. He'd bring the USA Today and I'd bring the LA Times, we'd read the sports sections of each paper and then trade off. Then we'd read the comics. At the time it was the golden period of comics. Doonesbury was at his peak, the Far Side was worth a conversation everyday, but a new kid had arrived in town. Calvin and Hobbes; and they killed me every day. I could always tell when they were good because Jerry would let loose a bark like laugh. Short but to the point. Some people have a good laugh, Jerry was one of those. If you heard it, you knew it was worth finding out why.

At work the friend who got us together in the 1st place called us Calvin and Hobbes. He was the older tall wise tiger and I was an out of control short youth who had a little too much energy and always said the wrong thing because the empathy and edit button had yet to exist in my mind. He had a  measured way of talking, never talked to hear himself, and usually could make his point in a sentence while I needed a paragraph.

I learned first hand that nothing shook this guy, he was calm in every situation. "You need to calm down" was something I heard alot from him but he always said it with a laugh or in a tone that never bothered me.  I once almost drove him over a parking cliff in my hurry to get somewhere. He calmly looked at the pole that had kept us from dropping a story onto a Porsche and asked if I planned on using reverse. Later just before he left our mutual work place  a friend and I  talked him into going bungee jumping when it was illegal and you had to drive to some remote spot by invitation only. We ended up at this place where you jumped from a tethered hot air balloon just before sunrise so as to get the jumps in before the police found the spot. The guy running the balloon was already drunk on Jack when we started. The guy checking our locks was killed two weeks later when he did a bungee jump and hadn't checked his own locks (true story). Mutual friend Mark Lippert and I did our jumps without any mishap but when it was Jerry's turn he ended up getting smacked by the tethered line and by the time he was on the ground he had blood all over his face. It made for a great picture and story but I was plenty scared for him when his head was snapped back by that line. 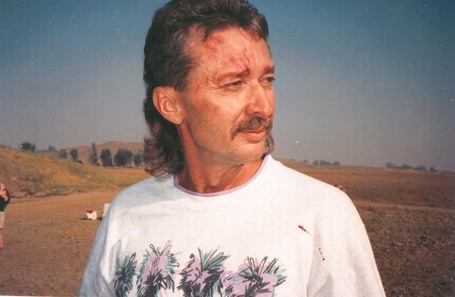 Our fun all came crashing down one day when we had a company party. Our new warehouse had just been completed and those who were part of the Culver City warehouse were going to be moving to Dominquez Hills and the rest of us were headed to the sterile corporate Santa Monica office. The party moved from a hotel/bar to my place in Santa Monica but I had to take a co-worker home first. By the time I got to my place, Roger and Jerry were waiting for me and told me that our friend Rueben and been run over while trying to park his motor cycle in front of my place. It was a sobering end to a fun two years. (Rueben survived)

Jerry would leave our company soon after that and start a journey of jobs that saw him hang his hat in San Jose, Palm Springs, Chatsworth, Las Vegas, and finally Austin.  He's now 60 and hanging out in Austin. The idea that Jerry is in Texas and not California is a tough one for him.. No one appreciated Southern California and the woman of our area better then Jerry.  I never expected Jerry to make it to 60. With his smoking I figured I'd be doing his eulogy but so far he's eluded the big C. Our getting together was very unlikely but I'm sure glad it happened.  For the last 20 years our friendship has mostly been reduced to phone conversations. It works,  but the fun of Jerry was hanging out with him.  Throughout  those 20 years he maintained his hatred of the Dodgers and I still hate the Raiders. He will always be the tall wise tiger to me. I was saddened  when the comic strip  Calvin and Hobbes came to an abrupt end but not as sad as when my real life Hobbes road off into the sunset. Since Jerry left I've had little inclination to read the comics anymore.

It would be great if that was how the story still ended. Life however always seems to be throwing some Kershaw like curves at you. During the same week I was basking in the Dodgers finally winning some postseason games, my old Hobbes has come down with a multitude of cancers.  Lung Cancer, Liver Cancer, and Bone cancer have invaded his space. I don't know what the future holds for Jerry but I do know when he is gone he will be missed. He helped whoever he could with whatever means he had. On the surface he was a cynic but underneath he had a big heart and real compassion for those who deserved it. Anyone who had the benefit of his help and friendship understands what I'm saying. I'm not sure where my life would have turned if Jerry had not been there at the time we met. I know one thing, my life would have been lesser without his friendship.

Jerry L Sullivan died on Feb 24th alone in a VA hospital in Austin, Texas. His ashes will at some point find themselves scattered in Yosemite, his favorite place in the world besides sitting in a bar surrounded by pretty barmaids and drinking friends.