"The greatest trick Andruw Jones ever pulled was covincing the world he didn't exist."

-Not said by Jeff "Verbal" Kent 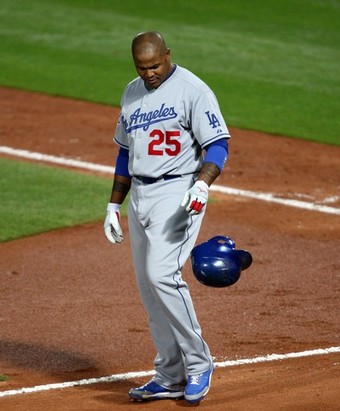 Andruw Jones after striking out, via cache.daylife.com

Happy Andruw Jones Releasing Day everybody!  Today, January 15, is the day by which the Dodgers must either trade or release Andruw Jones, per the terms of the agreement to restructure his contract.  Of course, why would anyone give up anything to the Dodgers for Andruw when they know he is going to be released by today anyway?

Thus ends the relationship.  I think it's fair to say Andruw Jones is the worst free agent signing in MLB history.  The Dodgers gave Jones a $36.2 million contract over two years -- I move I supported at the time by the way, since I thought it was a short-term risk for a once great player who could possibly rebound in 2008 -- but he showed up out of shape and never hit a lick for the Dodgers:

Jones was also 5 for 58 with runners in scoring position.  It took Manny Ramirez all of 12 plate appearances with RISP as a Dodger to get his 5th hit, and that included 3 walks and a HBP!

Growing up, I used to hear horror stories about disastrous Dodger free agent signings such as Dave Goltz and Don Stanhouse, both of whom came aboard in 1980.  Mike Davis bombed in Los Angeles (from 22 HR in 1987 with Oakland to 2 in 1988 with LA), but of course he is forgiven since he got the most famous walk in Dodger history.  The tragic failures of hometown signing Darryl Strawberry still haunt me to this day.  And don't get me started on Juan Pierre!

However, none of these signings were as bad as Andruw Jones.  So I guess I should thank Mr. Jones for recalibrating my scale for measuring bad free agent signings.  I guess he served a purpose after all.