The Stars At Night Are Big And Bright...

Share All sharing options for: The Stars At Night Are Big And Bright... 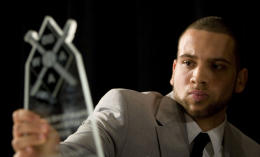 James Loney, surveying his award, via The Houston Chronicle

Former Dodger Wesley Wright, lost to Houston in the 2007 Rule 5 Draft, won the Astros' Rookie of the Year award at the event.

Loney always struck me as someone with a great sense of humor.  His former roommate Delwyn "Pee Wee" Young (thanks to Jacob Burch for the link) calls him "Weird Game James."  Loney's impression of Manny Ramirez, complete with souvenir dreadlocked skull cap, on ESPN's Rome is Burning last year was hilarious.  There were a couple of quotes from the awards dinner that don't sound that funny, but I have no doubt Loney made them funny with his dry wit (alas, no video yet).

Following Astros' MVP Lance Berkman at the podium, Loney asked for Berkman's autograph as they passed each other on the dais.  Loney then delivered this line:

"I have a teammate named Manny Ramirez, and no, I don’t know when he’s going to sign," Loney said.

During his speech, Loney expressed appreciation to two unlikely targets, both of which apparently helped him to curb his boredom during the long days and nights at Spring Training: "Sam Walton, for giving us those super stores, and Fox's American Idol."

I like this about Loney.  He's smart with his money.  He doesn't like to pay exorbitant prices for laundry detergent or car batteries.  Don't worry, Weird Game, your first big payday comes in 2010 (Loney's first year he's eligible for arbitration).  In fact, you might want to get some pointers from Russell Martin on how to secure a multi-year contract.  Then you can upgrade to Target, and Lost.