"The baseball awards banquet will be held on Jan. 15 in the Grand Ballroom at the Hilton Americas Convention Center Hotel. This year's honorees include team MVP Lance Berkman, Pitcher of the Year Jose Valverde and Rookie of the Year Wesley Wright. Hunter Pence will receive the Darryl Kile Award, while Dodgers outfielder James Loney will be recognized as the Greater Houston Area's Major League Player of the Year."

Emphasis mine.  Not only did Loney beat out other Houston area players such as Adam Dunn, Kerry Wood, and Chris Young, among others, but apparently was versatile enough to qualify as an outfielder despite not playing there since 2007.  And we all know what happened during that one fateful inning: 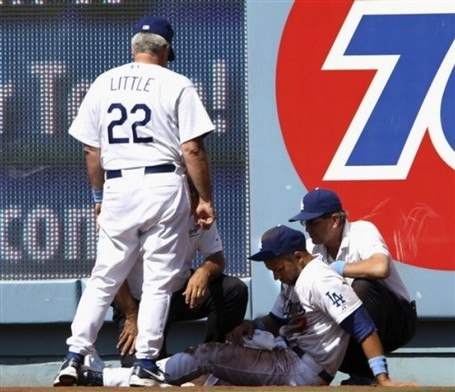 Congratulations, Weird Game James, on this award.  I will always remember your grand slam at Wrigley.  Let's hope it carries over into 2009.