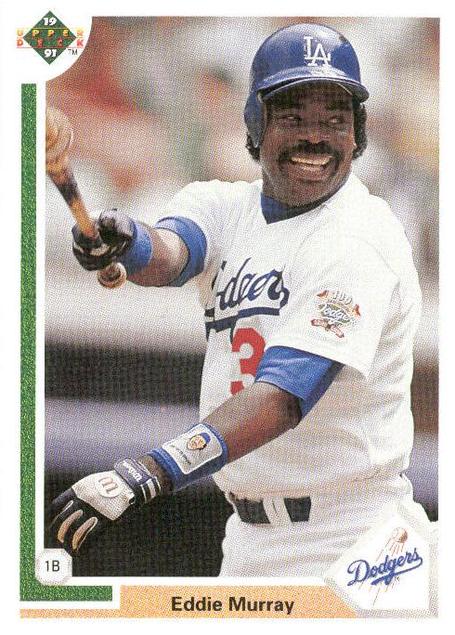 Fresh off a world championship in 1988, the Dodgers sent Brian Holton, Juan Bell, and Ken Howell to the Orioles for slugging 1B Eddie Murray.  Twenty years ago, outisde of Braves games on TBS and Cubs games on WGN, there was really very little non-local baseball on television outside of the NBC Game of the Week.  I knew very little of Eddie Murray, but I did know that he was a feared hitter, one of the very best in the game. Murray came to the Dodgers with 333 HR, back when hitting 300 career HR seemed like a cool milestone (he was 47th all-time at that point), through only his age 32 season.

As a twelve year old fan still basking in the glow of the heroics of Kirk Gibson and Orel Hershiser, I was not in the market for a new favorite player.

Eddie Murray started his Dodger career in 1989 with the worst season of his career.  He only hit .247 (I'm sure I was aware of this in my pre-sabrmetric days) and put up a 113 OPS+.  It was a disappointing season for the Dodgers as well.  Gibson was hurt, and the club finished 77-83 and in 4th place in the NL West.  Still, I wasn't all that disappointed in Murray individually.  He did after all have 20 HR and 88 RBI.  The RBI total was amazingly the 7th highest single season total for the Dodgers in the 1980s. 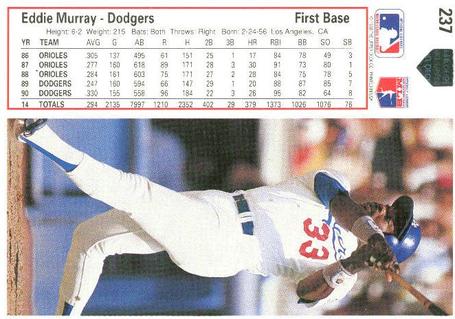 It was 1990 that I fell in love with Eddie Murray the player.  A torrid summer affair led to Murray achieving the coveted status of my favorite player, a status he has not relinquished to this day.  I started to become aware of and grew to appreciate his amazing exploits in Baltimore, and nearly winning a batting title didn't hurt either.

That brings me to my favorite piece of trivia ever.  Eddie Murray is the only player in MLB history to lead the majors in batting average yet not win a batting title.

The 1990 batting titles went to George Brett (it was the 3rd batting title for the HOFer; I remember there being a huge deal made at the time about Brett winning batting titles in three decades -- 1976, 1980 & 1990) and Willie McGee.  McGee hit .335 for the Cardinals before being traded to the A's on August 29.  McGee had 542 NL plate appearances, more than enough to qualify for and win the NL batting title.  It's bad enough Willie McGee stole Pedro Guerrero's MVP award in 1985.  Now he took a batting title from my newly minted favorite player!

With the benefit of hindsight, Murray's 1990 season is one of the best in Dodger history.  As researched by Phil one year ago, Murray in 1990 had the most Win Shares (31) of any first baseman in LA Dodger history.  His 158 OPS+ is 7th best in Dodger franchise history by a 1B, behind only seasons from Brooklyn Dodgers Dan Brouthers, Dolph Camilli, and Jack Fournier.  In other words, all it takes to become my favorite player is one of the best seasons in franchise history!

Among the gifts I received this Christmas came from my brother Greg, who lives near Eddie Murray's old stomping grounds in Baltimore.  I really didn't know what to expect when I opened the heavy shoebox shaped box, but I was floored by what I saw.  Inside was a bottle of wine; not just any wine, mind you, but rather Eddie Murray 504 Cabernet Sauvignon!!!  What an amazing gift.  I'm not sure if I should drink the wine, or just have it on display*. 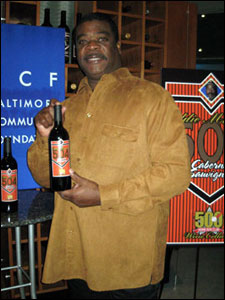 *I'll probably drink it and save the bottle.

Thanks, Greg, for a great gift, and a great reason for me to remember my favorite player.