A Great Game, A Great Comeback At Dodger Stadium

Share All sharing options for: A Great Game, A Great Comeback At Dodger Stadium

Yesterday was a great experience at Dodger Stadium.  I got to take in the game with both of my brothers, a rare occurrence since one lives on the other side of the country.  From our vantage point high atop the reserved level down the left field line, we saw batter after batter walk back to the dugout after either striking out or not getting solid contact on the ball.  Our rough count on site was 289 pop outs for both teams, but it turns out that estimate was a tad high (it was six, according to the box score).

Pedro Martinez was brilliant after a 15-day layoff, turning back the clock to the not-so-distant past when he was the best pitcher in the game.  Vicente Padilla was nearly as good, his only blemish a curve ball blasted into the pavilion by Ryan Howard.  Before Howard's fourth inning blast, my brother and I were talking about Padilla's woes against lefties (opposing LHB hit .303/.384/.453 off Padilla this year, .297/.380/.479 career) being a bad combination against Howard, who has feasted on right-handed pitching his entire career (.307/.409/.661 lifetime).  Then, boom!  Howard's rocket seemed to take two seconds to leave the park.  But even with that, Padilla pitched a great game.

When the Dodgers were down 1-0 in the later innings, the seeds of doubt were beginning to sprout.  We were getting close to heading to Philadelphia down 0-2 with the prospect of facing their best pitcher, Cliff Lee, in Game 3.  However, the game was still just a one-run affair, and if this Dodger team has proven anything this season, it's that it won't go down without a fight.

The crowd was a good one, very lively through most of the game, even though there was so little action for most of the contest.  But, every time Padilla needed to get one strike or one out to end an inning, the crowd rose to offer their support.  During the eighth inning, it became a standing affair as the crowd was ready for a comeback off the Philly pen.  We erupted on Ronnie Belliard's bunt single, as the deficit seemed a sure bet to be erased.

Russell Martin grounded into a sure double play, which was so deflating...until Chase Utley helped the team that first drafted him by wildly overthrowing Howard at first (shades of Mark DeRosa in the NLDS?), allowing Juan Pierre to Beast Mode his way home with the tying run.  At that point, there was a tremendous sense of relief:  imminent defeat left our doorstep, the game was tied, and now the go ahead run was on base.  When Jim Thome ripped a single to right, the desired result was tantalizingly close.  The go-ahead run was at third with only one out.  Then Rafael Furcal walked, and high fives and high tens were exchanged by seemingly every member of our section, as we knew this game was ours.

Bases loaded, one out.  Up steps The Bison.  What a perfect time for the team MVP to come through.  Matt Kemp struck out, of course, although reading through some of the comments here you would have thought Kemp broke up the McCourts' marriage, murdered a group of puppies, and gave the green light to the TV series "Cavemen."  After Kemp's out, rather than the world coming to an end, the Dodgers still had one more shot with the bases loaded.  Andre Ethier came to the plate, and I'm sure the people around me were getting tired of me bringing up that Ethier was hitting .305/.376/.610 against LHP at home this year.  Once he took ball four, to bring home the go-ahead run, the stadium erupted, the comeback now complete.  Even when Manny Ramirez failed to hit the grand slam we were all hoping for, we were still sitting pretty, with Jonathan Broxton coming in to slam the door on the Phillies in the ninth.

The top of the lineup was due for the Phillies, but all I could think was "don't let Ryan Howard bat, don't let Ryan Howard bat."  Not that I wouldn't be confident in Broxton's ability to retire Howard (nine hitless at-bats with five strikeouts before yesterday in his career, including postseason), but I wasn't in the mood to deal with that pressure.  Two groundouts and a lineout to Andre Ethier ended it, and it was time to sing along with Randy Newman yet again.

I have now seen five Dodger playoff wins in my lifetime, but this rates as the most thrilling.  The others involved the Dodgers taking an early lead and never looking back:

I don't know how many times the Dodgers have to comeback and win before people stop using words like "quit" or "give up" or "it's over" with this team.  It's as glaringly obvious as Craig Sager's jacket that the 2009 Dodgers don't stop believin'.  Now, if they can just hold on to that feeeeeeeling for three more wins, it's World Series time at Dodger Stadium for the first time in 21 years.

Here are some pictures from yesterday's game:

Just in case you forgot what series this was:

This was just before Belliard's bunt single: 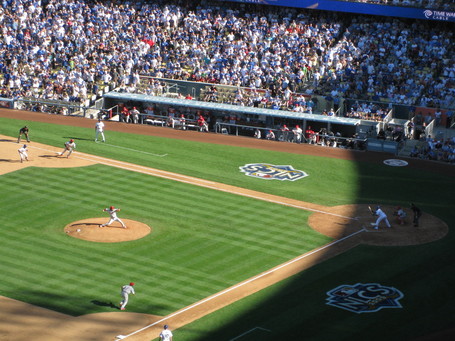 This was when Russell Martin fell to the dirt on Chan Ho Park's inside pitch: 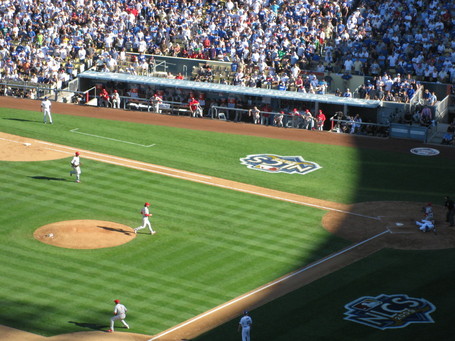 Here's the team celebrating the win: 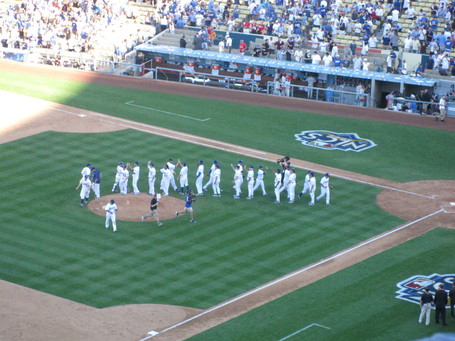 I wish I had a better zoom so I could capture the hideousness of Sager's pink jacket: 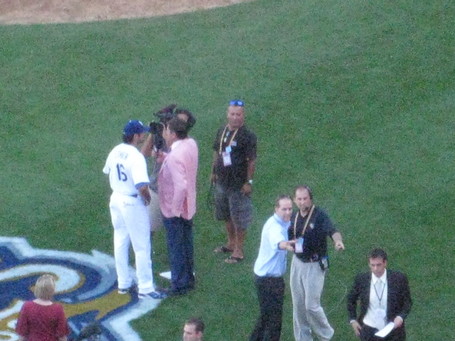 And just in case you were wondering the status of my playoff beard, here are The Stephen Boys (youngest to oldest, left to right): 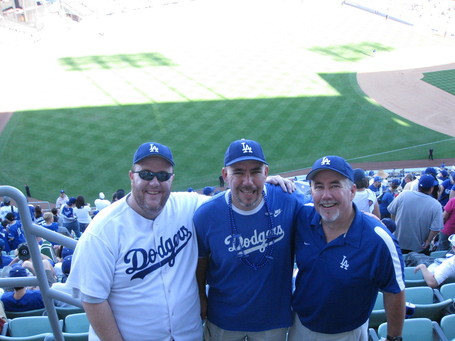