Tool Time with Roger McDowell - Dodger Player of the Day

Share All sharing options for: Tool Time with Roger McDowell - Dodger Player of the Day 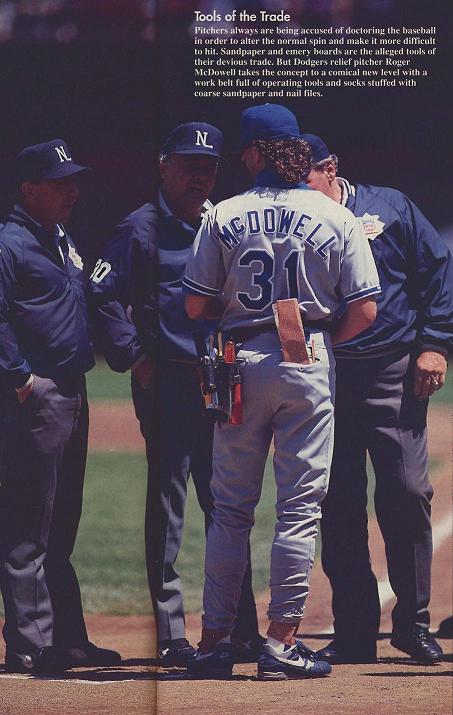 Roger McDowell was born on 12/21/1960 and came  into the league when relief pitchers were still men, throwing 127 innings in only 62 games as a rookie in 1985.  While McDowell had his moments on the mound he was probably better known for his pranks.

While McDowell was a stable major league-level pitcher, he was also notorious in the league and among fans as a prankster who would light firecrackers in the dugout and light matches hidden under teammates' cleats. This was known as the Hot Foot. During a nationally televised game, he was filmed with his uniform on upside down – his pants over his head with his shoes on his hands. He also took part in an on-field mariachi band and wore earrings in the clubhouse to protest Cincinnati Reds' owner Marge Schott's banning of earrings.

McDowell joins other well known Dodger pranksters such as Jerry Ruess and Jay Johnstone. McDowell didn't join the Dodgers until 1991, and pitched for us for four unremarkable years. Primarily a groundball pitcher his success or failure was predicated on luck and the defense behind him, so with Jose Offerman as his shortstop he didn't have his best years with us. As an example of that in 1993 he gave up 32 runs of which only 17 were earned.  Almost 50% of the runs he gave were unearned.   McDowell retired in 1996 and rejoined the Dodgers organization as a minor league pitching coach from 2002 - 2005 before joining the Braves as their major league pitching coach.  Some of our best young pitchers tutelage'd under McDowell during his tenure as one of our minor league pitching coaches.