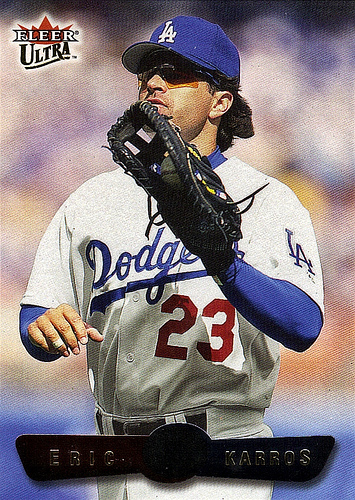 While perusing the HOF eligible group for 2010 I stumbled upon the fact that Eric Karros is on the ballot. Can we make a case for Eric? No question about it, not even Robert Downey's Sherlock Holmes could uncover enough clues to make a case for Eric Karros to be a HOF. That said does he have any attributes that would help his case?

1. Great Hair - in fact what is it about LA Dodger first baseman and their hair. Wes Parker parlayed his hair into a failed TV career, Steve Garvey used his hair to father one of the great Dodger blogs, Karros used his to become an annoying but successful baseball TV analyst.  Does anyone on the 2010 HOF List have better hair then Eric Karros?

2. Most home runs by a LA Dodger first baseman with 270 eclipsing Garvery by 59 home runs.

3. Most cliches per minute then any other color analyst. "No Question" is his trademark answer when his play by play man throws him something to enlighten the baseball world with.

4. Never won ONE playoff game while a member of the Los Angeles Dodgers.

Okay, not much of a case, not even as good a case as Robin Ventura who also played a little first base for the Dodgers in 2003/2004.  Still for many Dodgers fans who came of age in the early 90's  Eric Karros was their favorite Dodger. Local boy who went to UCLA he was the guy who was never considered a real prospect.  Drafted in the sixth round at the age of 20 in 1988 he climbed the minor league ladder every year and made his debut in Sept of 1991.

The team had finished in 2nd place in 1991 and they had acquired Eric Davis that winter, so the outfield looked to be one of the best in baseball with Davis/Butler/Strawberry. Sweet swinging Kal Daniels was expected to play 1st base. Everything went wrong that year except for one thing.  Two games into the season and Daniels was hurt so Karros got the nod on April 9th. He hit a home run in the 1st inning against Craig Lefferts  in his first start in 1992 and never looked back winning the 1992 ROY Award by a landslide over such notables as Moises Alou, Reggie Sanders, and Tim Wakefield.

That rookie season would start a run where Karros was the Dodger 1st baseman from 1992 - 2002, a span that was longer then any other LA Dodger 1st baseman. He had a series of  thoroughly  mediocre years  but once in a while he'd kick in an excellent season such 1995, 1998, and 1999.  If Eric Karros had left the Dodgers in 1999 he would be remembered much more fondly then he is but as happens with anyone who sticks around to long the downslope years of his career are now remembered more then his good years probably because he was getting a large contract and was not delivering the goods.  During the last few years of his career I can remember him barely running to 1st base on any ground ball because of the pain in his knees,.or getting off to slow starts and telling everyone not to worry as though the games in April don't count as much as the games in Sept.

Eric Karros has no HOF case. He is not even the best LA Dodger first baseman, and more then likely is not even the 2nd best or 3rd best LA Dodger first baseman. However he did give the Dodgers plenty of great memories during his long reign. Mine was his home run in his first start of 1992 that started his career but along the way he must have given you some memories,  good or bad. What were they?