Today is one of the most glorious days of the year. Tiger Woods returns to the PGA Tour in the WGC-Accenture Match Play Championship!

Actually, more importantly, today is also the first game of spring training. This is the first "Play ball" since Game 5 of the NLCS, a long four months ago. When Woods was busy winning the U.S. Open on a torn ACL and broken leg, the Dodgers were at their lowest point of the season. They just got swept by Detroit and were a season-worst seven games under .500, 5½ games behind the Diamondbacks.

The Dodgers were able to turn around their season, finishing 53-40 to take the NL West. They then faced today's opponent, the Cubs, and this happened: 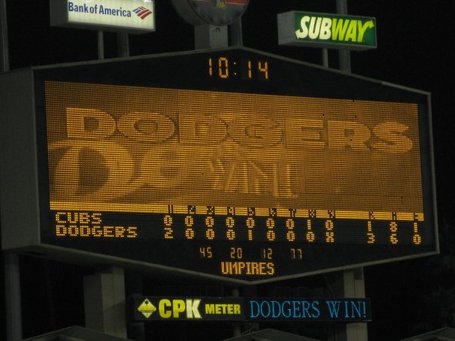 The Dodgers and Cubs lock horns again today at HoHoKam Park, one of the greatest park names in all of baseball. Here is what we know about today's game:

UPDATE: Per Diamond Leung, here are the starting lineups:

"Let's go. Batter up. We're taking the afternoon off! It's a beautiful day for a ball game..."