Martin Has a Little Captain in Him

Share All sharing options for: Martin Has a Little Captain in Him 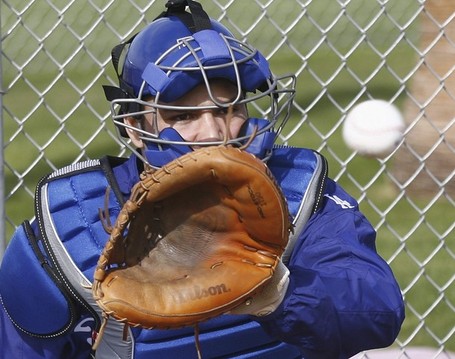 Dylan Hernandez of the LA Times has a profile about Dodger catcher Russell Martin, noting the maturity of the two-time All-Star entering his fourth season.

The player who, in third base coach Larry Bowa's words, used to squeeze the sawdust out of his bat looked relaxed. He sounded calm. Asked whether he was smoking something to settle his nerves, he laughed and offered another explanation for his newfound tranquillity: "I feel I know who I am more than ever. I'm not trying to be anyone but myself."

Martin has set himself apart as a leader of this club. He took over as the team's union player representative -- from Scott Proctor!!! -- so he's capable of handling extra responsibilities. He's got a new girlfriend. He's doing Yoga. He's one of the best catchers in baseball.

The Dodgers have not had a captain since Davey Lopes gave up his captaincy in 1979 (during the tumultuous season when manager Tommy Lasorda famously told the underachieving team they were "rusting on their laurels."). All in all, there have only been five team captains in Dodger history:

Will making Russell Martin a captain make much of a difference? Probably not, but it seems kind of cool to me. Martin has already added a "J" to the back of his jersey; why not add a "C" to the front?