2009 Topps baseball cards hit stores this week, with the release of Series I.  Here's a look at the set with the help of some Dodgers.   I really like this picture of James McDonald.  He seems to have a bit of Matt Kemp Eyes; or perhaps he is showing disdain for the batter.  McDonald did after all have a 0.00 ERA in 2008. :) 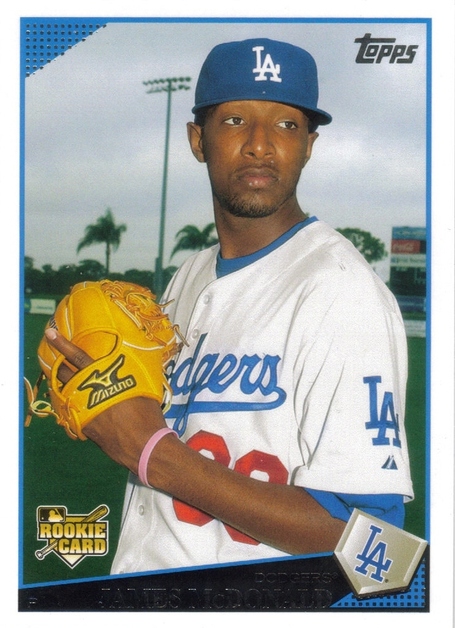 I like the design of the cards this year.  There is very little clutter, leaving a lot of room for the pictures.  The home plate logo on the bottom right looks pretty cool too.  I'm not a big fan of the "Rookie Card" notation because it clutters up the card.  Also, if a player is good enough to have his rookie card worth anything, collectors will figure out which cards are his rookie cards, without the need for a special mark on the card.

The back of the cards are pretty good design as well. There is a rounded top on which extra information is displayed. 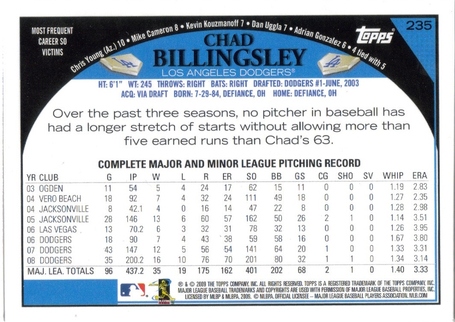 Over the past three seasons, no pitcher in baseball has had a longer stretch of starts without allowing more than five earned runs than Chad's 63.

That stat is just obscure enough to love, not to mention makes me long for Ross Porter.  Sadly, Billingsley's streak ended last September in Pittsburgh. 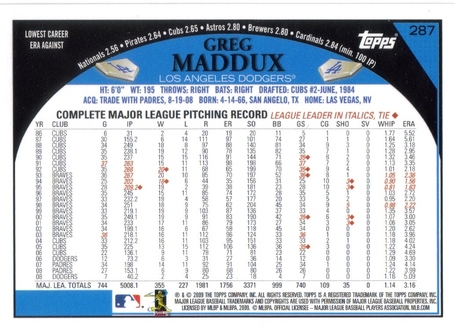 For a legend like Greg Maddux, the font gets smaller but all the major league data is there.  If a player leads the league in any category, that number is in red and italicized, so for a legend the card looks like a Pedro Guerrero math test after it has been graded by a teacher.  On Maddux's card, it looks like there is a typo as Maddux didn't lead the NL in games pitched in 2003 (he did lead in starts though).  Paul Quantrill of the Dodgers led the NL with 89 games pitched that year.

Speaking of Quantrill, the Dodgers received a compensatory draft pick in 2004 after Quantrill signed with the Yankees.  The Dodgers used that pick -- #28 in the first round -- to draft Blake DeWitt, projected to be the starting second baseman this season.  Eleven picks earlier, the Dodgers drafted another player from Missouri, pitcher Scott Elbert. 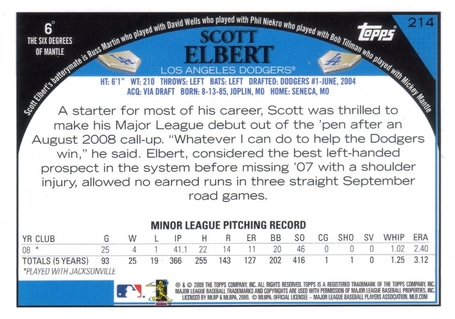 Elbert's card shows a cool feature that Topps put on a number of cards in this set, the "6 Degrees of Mantle."  This is of course a play on the famous "6 Degrees of Kevin Bacon" game (which my cousin and I played continuously during a family reunion a few years back, much to the annoyance of everyone else).  Here's how Topps connected Elbert to Mickey Mantle:

I really liked this horizontal picture of Rafael Furcal on his card: 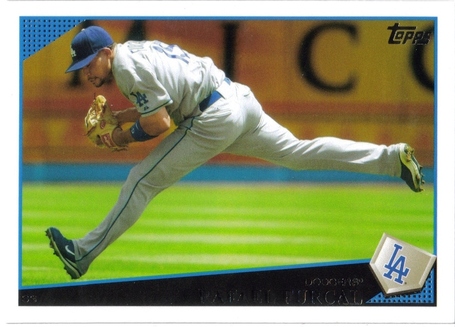 Topps also has parallel cards with a gold border instead of the standard white.  These cards are individually numbered to 2009.  Here is one of The Bison, Matt Kemp: 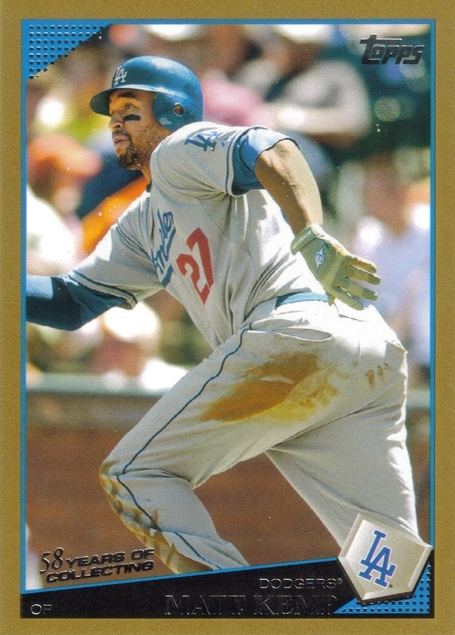 In addition to regular cards of players and managers, there are also season highlight cards.  Not all of them bring back good memories: 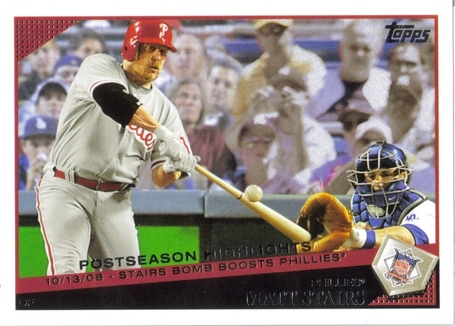 If you look at this card long enough, you can convince yourself Stairs is about to serve a single to left through the Tony Gwynn 5.5 hole.  That sadly wasn't the case, but we can take solace in the error on the back of the card: 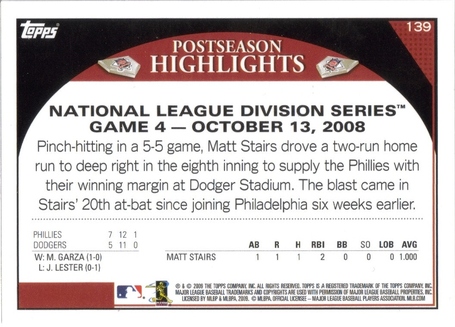 I was at Dodger Stadium that fateful night, and I don't remember Matt Garza or Jon Lester getting a decision in that game.  We can't end on that card, obviously, so here is one of Manny Ramirez with the subtitle "Manny Crushes Cubs Postseason." 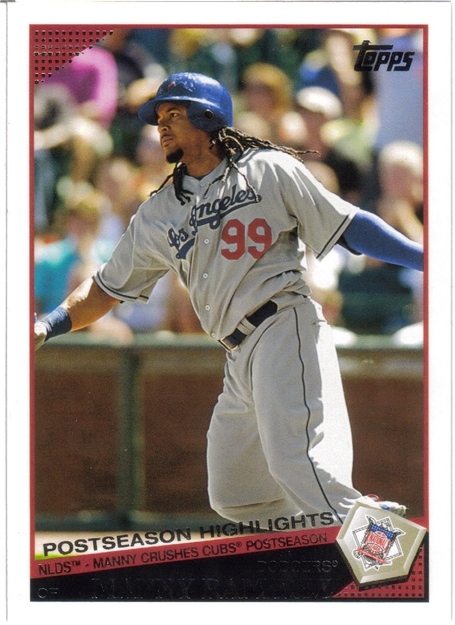 Overall, it's a pretty cool set, with a better design -- front and back -- than last year (and I liked last year). Here are the cards involving the Dodgers in all of Series I:

If you're wondering where some other Dodgers are -- Russell Martin, James Loney, Andre Ethier, Clayton Kershaw, Jonathan Broxton, and others -- they will be in Series 2, due out later in 2009.