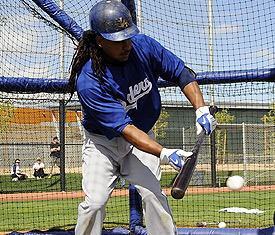 The Dodgers host the Korean National Team today at Camelback Ranch, as the long awaited return of Manny Ramirez finally comes to fruition.

Per Ken Gurnick of MLB.com, the Dodgers will be cautious with Manny at first:

"I'm body sore because everybody else is ahead of me," Ramirez said. "I worked out a lot in Florida, but you have to get used to wearing spikes again. I have to get my running legs in shape. I'm Dave Roberts, you know? I'm going to be stealing bases this year. Oh, yeah."

Manager Joe Torre, not wanting to overextend Ramirez in his first game, seemed to be leaning toward starting him at designated hitter Thursday rather than left field. Torre said Ramirez would probably get three at-bats at designated hitter or two playing the field. He said he would talk to Ramirez about it before making out the lineup.

Since Team Canada was eliminated from the World Baseball Classic, Russell Martin is now back with the Dodgers as well, meaning the gang's all here, as far as the offense is concerned.

Shin-Soo Choo is the only major league player on the Korean roster.

Technically, today's game is merely an exhibition so it will not count in any of the spring training stats.  However, the game is being streamed for free on Dodgers.com.  Click here to watch.

UPDATE:  Well, we all got dressed up for nothing!  Per Tony Jackson, Manny was scratched from today's lineup.