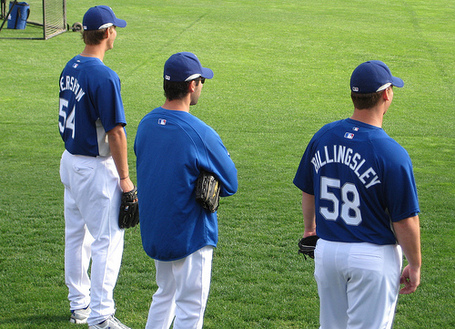 There are many reasons for Dodger fans to be excited about this team, this organization.  Perhaps no two players are as important to the organization as Chad Billingsley and Clayton Kershaw.  When the stories about the 2009-2012 Dodgers have all been written, these two young pitchers will be key characters.

Billingsley is the elder statesman of the two, as he is about 3.5 years older than Kershaw.  While Kershaw held his own by providing league average pitching as a 20-year old in his first taste of the big time, Billingsley has spent the last two years emerging as one of baseball's best pitchers.

Can we use Billingsley's progression to project how Kershaw will perform?  I understand there are many differences between the two and it's probably a futile effort to even suggest they will follow similar paths, but let's take a look at Billingsley and Kershaw at similar stages of their career.

To date, Clayton Kershaw has made 21 starts with the Dodgers.  Let's compare him with Billingsley's first 21 MLB starts:

*Age is as of the date of the 21st start, per Baseball-Reference.com

Despite being more than two years younger than Billingsley at the time of their respective 21st starts, Kershaw was the more successful and more polished pitcher.  Despite an ERA nearly a run higher, Kershaw's peripherals were all better than Billingsley's, and in fact Kershaw's Fielding Independent Pitching (FIP) was almost a full run lower.

What I want to know is, what does this mean for Clayton Kershaw for 2009 and beyond?  We know Kershaw is firmly entrenched in the starting rotation, so let's assume he will get 30 starts this year.  How did Chad Billingsley do in his next 30 starts (after his first 21)?  Let's take a look:

Billingsley cut down his walks, increased his strikeouts, and lowered his FIP by over a run and a quarter.  Will Kershaw enjoy a similar development as Billingsley?  He does have a better baseline on which to improve, so thngs could get exciting and real quick.

Here are the 21-year olds in Dodger history to have an ERA+ of 100 or higher:

Kershaw should fit nicely in the middle of that list.

Even after two solid seasons by Billingsley in 2007 and 2008, the Prospect Handbooks have projected Kershaw to be the #1 starter in 2011 and 2012, followed by Billingsley at #2.  If Kershaw can show the type of development exemplified by Billingsley, the Dodgers of the immediate future will be anchored by two of the best pitchers in baseball.

How does Kershaw himself feel about the Dodgers' pitching staff?  Per Mel Antonen of USA Today:

So lock your tray tables and put your seats in the upright position because the Dodgers are about to climb to new heights.