Share All sharing options for: The All-Time LA Dodger Team: The Backup Backstop

Our all-time LA Dodger team is almost set; the only thing missing is a bench. For sake of simplicity, we are limiting our bench to four spots:

Remember, we are limiting these spots to players who actually filled these roles. For instance, while Russell Martin or John Roseboro might be the best option to backup Mike Piazza, neither player was really a backup.

I set the bar at 50 games as a backup catcher to be on this list. There are seven that qualify, but we are only using four. I excluded Steve Yeager, Mike Scioscia, and John Roseboro from the backup list, because they happen to be the top three LA Dodger catchers in games started, each starting over 1,000 games at backstop.

Here are our backup catcher options, with their stats as LA Dodgers:

I'm going with the only guy on this list with an OBP above .300, Rick Dempsey. Actually, my reasons for picking Dempsey are much more emotional. He was one of the "Stuntmen," the nickname given to the group of bench players on the 1988 Dodgers (including Dave Anderson, Danny Heep, Mickey Hatcher, Tracy Woodson, and Mike Davis, among others).

After getting released by Cleveland after the 1987 season, the 38-year old Crespi High School graduate convinced Dodger GM Fred Claire to give him a job. Per the LA Times:

" ‘I called up [General Manager] Fred Claire, sat around his office for three or four hours until he would talk to me and finally he gave me an invitation to spring training. I made the club and promised him we’d win [the championship], and we did."

Dempsey had an unexpectedly good season, popping seven homers and a 129 OPS+ in limited duty. Filling in for an injured Mike Scioscia in the World Series, Dempsey fulfilled his promise to Claire, catching the final out of the World Series, producing this moment: 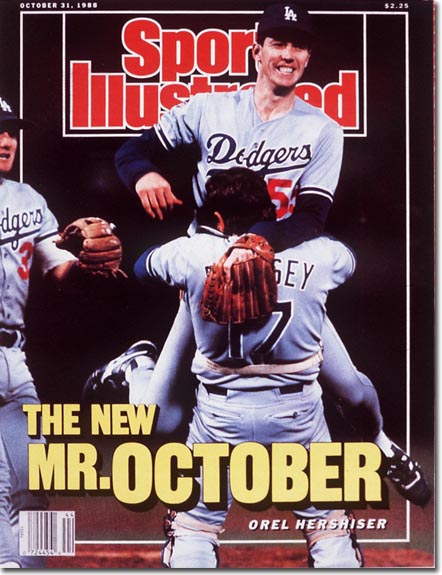 Ditto for me, loved Rick Dempsey.