With a little help from my friends

Share All sharing options for: With a little help from my friends

I went to my friend Jerry's memorial this weekend. This is the kind of memorial I'm most comfortable with, someone's house, casual, barbecue, March Madness, drinks, pot, and plenty of friends to talk about the deceased with. I'm not normally a drinker or pot smoker but I've found they work well together at a memorial of someone who you will miss. It makes the stories easier to tell, and it makes you feel closer to those telling the other stories during a time when closeness is not something to push away but to embrace.

It was a strange mixture of people as 1/2 of us knew Jerry for over 20 years when we all met him at work, and the other 1/2 half knew him after he had left our common workplace. His good friend Joe Guggina  bridged the gap between both groups as he also met Jerry at the original work place. After they both left the company,  Jerry had worked for him the last 20 years, as they moved  Joe's computer business from place to place.

Joe had had a tough month. His partner in his business for the last 10 years Bryon had liver cancer for a long time,  and had died earlier in the month. Several weeks ago he  was at this exact same house that we were doing Jerry's memorial when Jerry died. We all lose friends and family but Joe lost his good friend and partner,  and his best friend and co-worker within weeks of each other from cancer.  Joe and I have known each other for over 20 years and while we were never close  we have had some interesting times together.

Until I had left the 4+1 game early my biggest claim to fame to baseball stupidity involved Joe and one of the greatest playoff games ever played. Joe is an Irish/Italian from Boston who like many people back East came to California to seek his fortune and soon realized the West Coast is the best Coast.  Being a member of Red Sox Nation he scored some playoff tickets to the 5th game of the 86 playoffs. Joe, Roger, and myself went to the game as RedSox fans. We were out in the bleachers and getting heck from the Angel fans for most of the game. Down 5 - 2 in the 8th I'd had enough and since I'd driven solo I said good - bye and walked away from one of the greatest home runs in baseball history. Roger told me later that Joe was running up and down the steps and that the Angel fans were so shocked and discouraged they didn't even attempt to kill him.  I had known now what I knew then I'd have rooted for the Angels to win that game. Donnie Moore  should not have let one game define his career.

Anyway Joe put together the memorial for Jerry in Palm Springs because that was where they had run their business the longest, and all his friends were in the Southern California area.  He brought with him from Austin, Jerry's ashes, his lighter, his last cigarettes, his ratty UCLA hat, and the flag given to his family by the US Military for being a war veteran. His mom had been kind enough to let Joe bring the flag to the memorial. Since Jerry had died in Austin only Joe had been at the military service.  At the end of the evening we unfolded the flag, everyone gathered around it and took some pictures. We then had two vet's fold it back up just like you see on TV so that Joe could present it to his mom when he takes it to her in Wichita. Before he makes that trip, he'll take a visit to Yosemite and scatter Jerry's ashes where Jerry asked him to.

Jerry didn't believe in God and wasn't one to repent his atheism at the end of his sixty years of life. I didn't expect him to have much pull with the big guy, so even while he was being memorialized, his Bruins were being run of out Philly by Villanova, thus keeping us from crediting Jerry with any spiritual hoogla boogla.

A lot of things will never be the same without Jerry to talk to.  March Madness was already losing some of the vibe, and my football pool is now missing another original. His team will stay (South Park Cows),  as others said, we can't let South Park Cows drop out of the league just because Jerry did.  By the end of the night I was less one friend, but I'd gained a few more and gotten back in touch with a few friends who I'd lost touch with. It wasn't a net gain but it was better then nothing, and sometimes at the end of the day like that, that will do just fine.

And just to show this has a little to do with the Dodgers. Jerry introduced me to Remo Melucci who now runs the Elephant Bars in Arizona. He's a baseball nut and sent me this photo of our fearless leader he took with Joe a few days ago. 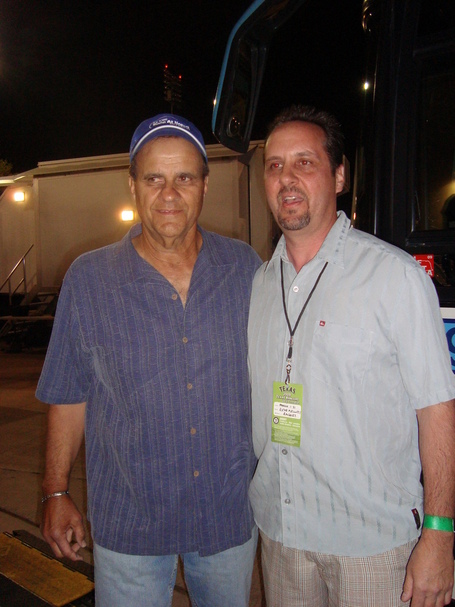