Why Jackie Robinson Is Important

Share All sharing options for: Why Jackie Robinson Is Important 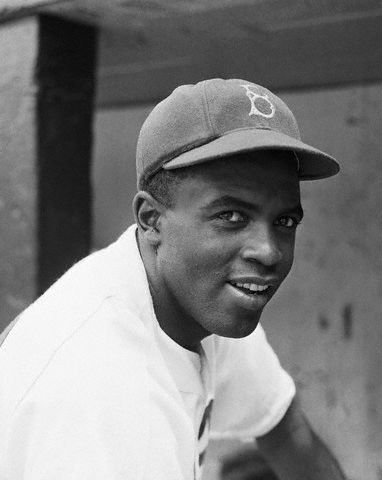 Rickey: "I know you're a good ballplayer. What I don't know is whether you have the guts."

Robinson: "Mr. Rickey, are you looking for a Negro who is afraid to fight back?"

Rickey, exploding: "Robinson, I'm looking for a ballplayer with guts enough not to fight back."

Today is the 62nd anniversary of one of the greatest days in baseball history.  On April 15, 1947, Jackie Robinson donned number 42 for the Brooklyn Dodgers for the first time, making him the first black Major League player in the twentieth century.

Over his ten year career, Robinson was a great player.  He wielded a booming bat, was a terror on the basepaths, and played outstanding defense all over the field.  But his importance stretches far beyond what he did between the foul poles.

I can't imagine all the insults and venom hurled Jackie Robinson's way in his first few years.  He showed exemplary courage in biting his tongue, as he promised Branch Rickey, even as opposing players and fans alike called him some of the most hate-filled names in the book.  Robinson endured countless threats, and was on the receiving end of many an overly agressive slide.

Robinson wasn't alone of course in his fight.  Larry Doby and other players soon followed him into the big leagues, and Jackie's wife Rachel had to endure just as much as Jackie.  I hope Mrs. Robinson is at Dodger Stadium tonight, as the presence of such an amazing woman would lift the spirit of the game.

As a Dodger fan, I am tremendously proud that my favorite team was the one Jackie Robinson played for.  So, as you watch tonight's Dodger game and see every player wearing Jackie's number 42, take a moment and give thanks for all his heroics, on and off the field.