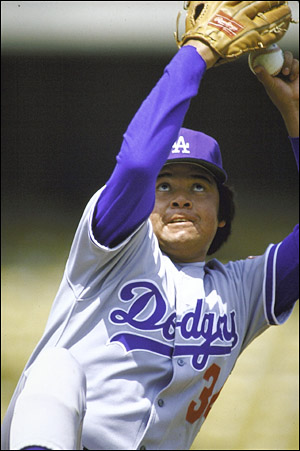 As good as Chad Billingsley has been for the Dodgers this season -- four wins in four starts with a 2.05 ERA -- the best pitcher in baseball thus far has been Zack Greinke of the Royals.

Greinke ended last season with a pair of scoreless seven-inning starts, and carried that shutout streak into last night's game against the Tigers. After four more scoreless innings, Greinke's scoreless streak stood at 38 innings, close enough perhaps for Orel Hershiser to start to sweat. Greinke's streak ended with two outs in the fifth, as an errant throw to third from shortstop Mike Aviles allowed Gerald Laird to score.

After the unearned run, all Greinke did was retire every batter he faced, giving him fifteen straight to end the game. Now his ERA stands at 0.00 through 29 innings in 2009, and his streak of not allowing an earned run stands at 43 innings. Buster Olney of ESPN.com tells us:

According to the Elias Sports Bureau, Greinke is only the second pitcher in the last 55 years not to give up an earned run in his first four starts of a season. (The other was Fernando Valenzuela more than 20 years ago.)

Ahh, Fernando. Valenzuela started his 1985 much like he did in his rookie season four years earlier. On opening day, Fernando faced off with Nolan Ryan in The Astrodome. The Dodgers got a run in the second inning, but would not score again on this day. The Astros used a pair of unearned runs -- one in the third, and another in the fourth -- to make Fernando a hard luck loser, 2-1. After his seven inning performance, Valenzuela's ERA was 0.00 but his record was 0-1.

Four days later, Valenzuela faced the Giants at Dodger Stadium. His teammates again would score only one run for him, on a Candy Maldonado homer in the 8th inning, but this time Fernando made it hold up, pitching a complete game shutout for his first win of the year. 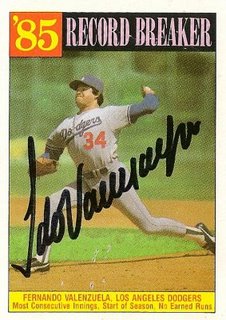 On April 18, Valenzuela started on four days rest at Jack Murphy Stadium against the Padres. Fernando was again on his game, shutting out the Padres 5-0, allowing only two hits -- one to Tony Gwynn, and the other to Kurt Bevacqua.

Five days later, Valenzuela took his amazing left arm on the road to Candlestick Park. Fernando was rolling along as usual until the fifth inning. With two outs and runners on second and third, Dodger shortstop Dave Anderson couldn't handle a grounder by Dan Gladden, and two unearned runs scored. The Dodgers could only muster one run, scored by Valenzuela himself on an Al Oliver double, and Fernando's third straight complete game was a 2-1 loss to the Giants.

In his fifth start of the season, Fernando was dominant at home against the Padres, striking out ten Friars while allowing only one hit and a walk through the first eight innings. However, the Dodger offense again took the day off and entering the ninth, the game was scoreless and Valenzuela's streak of not allowing an earned run stood at 41 straight innings, an MLB record to start a season. With one out in the ninth inning, a young Gwynn pulled a pitch over the wall in right field, ending Fernando's streak at 41.1 innings. The Dodgers failed to score in the bottom of the inning, and they dropped the game 1-0.

Valenzuela's April ended with these stats:

Fernando easily won NL Pitcher of the Month honors, making him the first pitcher with a losing record to do so. Tony Castro of Sports Illustrated summed up the month and showed Fernando's sense of humor:

Unfortunately, when Valenzuela takes the mound, the Dodger hitters frequently take the day off. Valenzuela the practical joker has been able to make light of it. When the drought was at its worst, Valenzuela was asked to recall the last time his teammates scored six runs for him. "They gave me five in San Diego and one in San Francisco. That adds up to six."

It was a wonderful month for the 24-year old Valenzuela, who would go on to have a great year in 1985. He won 17 games, struck out 208 hitters, and had a career high ERA+ of 141, all while throwing 272.1 innings. The Dodgers went on to win the division, and Valenzuela pitched two strong games in the NLCS, allowing a 1.88 ERA to the Cardinals, winning Game 1 and getting a no-decision in the Ozzie Smith Game.