"100 Things" A Must-Read For All Dodger Fans

Share All sharing options for: "100 Things" A Must-Read For All Dodger Fans 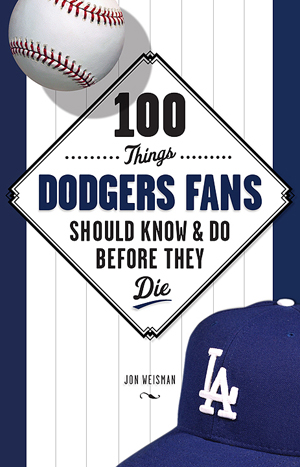 100 Things Dodgers Fans Should Know & Do Before They Die, written by Jon Weisman, is a wonderful book that no Dodger fan should be without.  Not only is the book chock full of facts, anecdotes, tidbits, and trivia about Dodger history -- both Brooklyn and Los Angeles -- but the wonderful writing of Weisman gives this book a broad appeal, to hardcore and casual fans alike.

Weisman has written about the Dodgers for almost seven years on Dodger Thoughts, and has set a high standard of writing his readers -- myself included -- come to expect.  This book did not disappoint.  His writing is clever, witty, humorous, and is written in such a comfortable, conversational tone that the reader feels invited, if not compelled, to read further.

Phil Gurnee called Weisman a poet, and at times he was.  While Phil was moved by the chapter on Kirk Gibson's homer, and rightfully so, here are a few of my favorite parts of the book:

I really can't say enough about this book.  I have a pretty good grasp of Dodger history, but this book not only taught me new things but also expanded upon subjects I thought I knew all about.  Even though I have read the book once, the 100 chapters make this a perfect reference book to refer to and reread over and over again.

Weisman mentioned that there isn't a definitive book about Don Newcome, and that if he didn't write it someone should.  Well, if Weisman can write a book about Newcombe half as good as "100 Things," I'll be the first in line to buy it.

I would like to add a 101st item for Dodger fans to do before they die:  buy this book.