The house that Kevin Elster built

Share All sharing options for: The house that Kevin Elster built 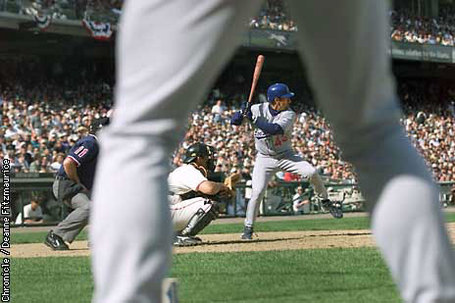 "When I decided to come back and play, I wasn't going to go into it unless I felt I could contribute, and a day like today makes me feel like I am. No one ever comes to the ballpark thinking they're going to hit three home runs, least of all me, but it sure feels good to do this on a day like today."

On April 11, 2000, the archrival Giants unveiled their brand new, $319 million dollar stadium, Pacific Bell Park.  I've since been to this stadium, and I must say it's an outstanding park.  The stadium is located right on the water, has breathtaking views, wide concourses, and an unbelievable variety of food choices.  But on this day, the Giants were to play their first game in their new park, and it would come against the Dodgers.

Kevin Elster had been out of baseball since being released by the Rangers in July 1998.  Elster retired to build a bar in Las Vegas.  According to Jeff Pearlman of Sports Illustrated, the bar, to be named Hootie, was going to be different:

"The city needs a place where people can play live music and just jam," says Elster, an amateur drummer. Elster hopes to open Hootie within two years. "My place," he says, "is going to be very different."

Elster seemed happy to be retired, but a call from the Dodgers rekindled his passion for the game, especially to play for his old manager, Davey Johnson.  Said Elster:

I just felt like staying home, sitting by the pool and not playing baseball. I was living a normal life.

Rather than sit by the pool, Elster's destiny was to play baseball next to the Pacific Ocean.  After signing a $300,000, non-guaranteed deal, the 35-year old Elster beat out Alex Cora for the starting shortstop position to start the 2000 season.  After starting the season with games in Montreal and New York, the Dodgers headed to San Francisco to help christen the Giants' brand new toy.

Kirk Reuter started the game for the Giants, and he was staked to a 1-0 lead, which held up until the number eight hitter, the new Dodger shortstop came to the plate in the third inning.  Elster took the first five pitches from Reuter, then slammed the full-count pitch over the center field wall for the first official home run in Pacific Bell Park.

A Barry Bonds home run -- the first at the park for the Giants -- in the bottom of the inning put the Giants up 2-1, a lead that would hold up until the top of the fifth.  Dodger catcher Todd Hundley led off the fifth with a single, to bring up Elster for his second at-bat of the day.  Again Elster let some pitches go by, but pulled a 2-1 pitch by Reuter over the left field wall to recapture the lead for the Dodgers.

The Dodgers' lead was 4-2 when Elster stepped into the batter's box for his third plate appearance, in the top of the sixth.  With Adrian Beltre on first base and pitcher Chan Ho Park on deck, Kirk Reuter pitched carefully to Elster, walking him on five pitches.  However, no rubber chicken was hung from the brick wall in right field.

Elster got another at-bat with one out in the top of the eighth, with the Dodgers nursing a 5-4 lead.  After working former Dodger prospect Felix Rodriguez for a full count, Elster drove a pitch deep to left centerfield, and it cleared the fence to complete perhaps the most unlikely three homer day in Dodger history.

The Dodgers held on to win 6-5, spoiling the first game in the Giants' new home.

Johnson told Jason Reid of the LA Times Elster was a key addition to the club:

Everyone talked about we'd be losing defense [with Elster starting], and I love defense, but you need someone who can swing the bat in the eight hole. This is going to open a lot of eyes around this league. Teams are going to see they can't pitch around our Nos. 6 and 7 hitters to get to our eight hole.

Over the long haul, it's probably not a huge deal that the Dodgers won the first game at Pac Bell Park.  After all, does anyone remember that the Reds won the first game at Dodger Stadium?  Still, there's a small measure of satisfaction in spoiling the party of an archrival, and thanks to Kevin Elster, most Dodger fans can have fond memories of the Giants' current stadium.