A Frustrating Night at AT&T Park

Share All sharing options for: A Frustrating Night at AT&T Park

I went to the game last night expecting to see an offensive outburst for the Dodgers and hopefully a relatively easy victory. Instead it was offensive frustration and missed oppurtunites that were capped by a painful 5-4 loss. The defense resembled a high school baseball game and Joe Torre mad some mistakes that I think could have been the difference in the game. This is how my gameday experience unfolded.

My sister and I got to the game early but were only able to see the end of batting practice. We went down to the first row on the first base line hoping to get a foul ball. Brad Ausmus hit a foul pop that looked like it was going just to land just in front of me to my right on the field so I scooted over a step or two. I prepared to catch it on a hop but it must have had a weird spin because as soon as it landed it darted to my left and went right into the hands of some girl ten feet from me. Little did I know this would be a microcasm of things to come...

We went to our seats in the third deck behind homeplate as the start of the game neared. There are flags for each MLB team on the awning of the third deck, all of which were flapping so hard in the wind that they were making loud snapping noises. From our seats the wind wasn't bad but once you got out from the cover of the stands the wind was absolutely howling. This ended up playing a part in the first eventful play of the game, as Andre Ethier and Matt Kemp collided going after an easy fly ball to right center, allowing Edgar Renteria to reach on a double with one out in the first. Ethier later said, "The center fielder takes the ball if we both call for it, but I never heard him. The wind was making so much noise."

After that Randy Winn hit a line drive over Kemp's head which Kemp broke in on before reading it correctly. His read was too late and Winn made it to third for a triple while Renteria scored. At this point if the outfield had been sound defensively the inning would have been over with no runs scored. Instead, Aaron Rowand hit a two out double down the line to score Winn and Pablo Sandoval squeaked a single passed the glove of Orlando Hudson to score Rowand to put the Giants up 3-0. Kemp had a chance to throw out Rowand at the plate but his throw was high so Martin had to jump for it, allowing Rowand to just get his hand in. Although there were technically no errors, all three runs should be solely on the outfield defense.

Despite the defensive miscues Randy Wolf was brilliant, going six innings, allowing just the three "earned" runs, and giving up six hits and no free passes with four strikeouts. Two of the hits were the aforementioned botched fly balls in the first inning. Later Furcal made a throw that pulled first baseman Mark Loretta off the bag at first accounting for another of the Giants  "hits". Furcal pulled Loretta off the bag again in the same inning but luckily Loretta was able to tag the runner for the out. Another hit almot fell in on a shallow pop fly to right but Orlando Hudson was able to make a nice play on the ball. Ethier could have gotten to it easily but for some reason let Hudson take the ball. To me this is worrysome because outfielders are always supposed to call off infielders if they think they can get to a ball, but Ethier hasn't taken charge. This is at least the third time I've seen this happen this year, and it has already cost us once in Houston I believe it was.

Meanwhile the offense was mostly pathetic against Barry Zito. He had more walks than strikeouts (3 vs. 2) but the Dodgers were only able to get three hits off of him in the first six innings. For some reason the Dodgers were consistently late on Zito, even though he has one of the slowest fastballs in the majors. There were numerous foul balls down the right field line and seven flyouts to right field of which only one was even hit hard. Manny had two such at bats. Finally, in the seventh Casey Blake hit a 2-run homer (which he pulled) and Juan Pierre followed with a pinch-hit single that knocked Zito out of the game. In came Merkin Valdez, who walked Furcal and then gave up singles to Hudson and Manny to give the Dodgers a 4-3 lead. It looked like more runs were coming but Kemp grounded into a double play on a 3-1 pitch with two men on to end the threat. Despite the joy of finally getting to Zito and scoring some runs, I had a feeling that the double play would cost us.

In the bottom of the 7th Ronald Belisario came in and pitched an easy scoreless inning. This was fine until the bottom of the 8th rolled around and Belisario was still pitching with Fred Lewis leading off. Never mind that Fred Lewis' OPS is 60 points lower for his career off of lefties (and almost 150 points lower in the minors), or that he had struck out all three times against the lefty Wolf, Torre had decided that we were going to live and die with Belisario. He had Will Ohman  warming up the whole 8th inning, and I thought that's who would pitch to Lewis, but apparently not. Frustration mounted as Lewis promptly singled to center to put the tying run on. Edgar Renteria then performed a slash play with Lewis running and lined a single past Casey Blake. Manny wasn't sprinting after the ball (Probably because he didn't know Lewis was running) so Lewis took third with nobody out. Belsario continued on and struck out Randy Winn after a tough at bat.

With almost 30 pitches, Belisario stayed in to face Rich Aurillia, who hit a 30 foot dribbler down the first base line. Belisario made the collosal mistake of trying to flip the ball weakly home with his glove, allowing not only Lewis to score but Aurillia to reach safely as well. Bengie Molina then came out to pitch hit as Ohman continued to warm up (Why, I have no idea. Lewis was the only lefty in the lineup. It was clear to everyone that Belisario was not coming out). Belisario threw a crucial wild pitch that allowed the runners to move up, putting the go-ahead run at third with less than two outs. Instead of walking Molina to load th bases Torre decided to pitch to him. Molina hit a grounder to Casey Blake but he double-clutched the ball and then went to first for the out to give the Giants the lead. Renteria probably would have been safe but when he's the go-ahead run, I think you have to at least try and throw him out. It was the last of a comedic number of defensive misplays that basically gave the Giants all of their runs. Still, where was Kuo? Where was Broxton? There were spots to use Ohman, Kuo, and Broxton, but instead Belisario was the only reliever used even after multiple off days for that trio.. He labored through 51 pitches last night, that is just completely unacceptable.

Brian Wilson came in for the save even though he threw more than 30 pitches on Sunday, which i thought gave us a chance. Instead, the hitters looked even more feeble than they had for the rest of the game. Casey Blake swung at ball four which was nearly in the dirt to strikeout. Blake Dewitt pinch-hit for Belsario (although Loney should have been the guy but was used needlessly for defense a half inning earlier, another managerial mistake) but struck out swinging without taking any good cuts. And then to end the game Furcal struck out without ever taking the bat off his shoulder. Not exactly going down with a fight.

Here's the win probability chart for the game. It pretty accurately shows the frustration level too: 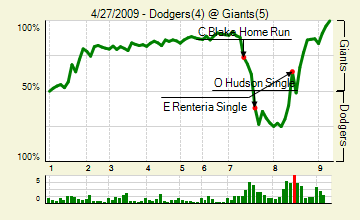 After the game my sister and I had to deal with the trash-talking (to put it lightly) of hordes of drunken Giants fans on the long walk back to the car. Apparently a loss means I should be ashamed to be a Dodger fan. I'll be going to the game on Wednesday too, this time with a bunch of Giants fans, so hopefully there will be a better result.

So while the pitchers actually did fairly well, the defense masked their performance resulting in a disappointing loss. Today Chad Billingsley goes against Jonathon Sanchez in a game we better win because Lincecum goes for the Giants tommorow.