Dodgers Come Out On Top 5-3 In Slopfest

Share All sharing options for: Dodgers Come Out On Top 5-3 In Slopfest

It was a really sloppy game last night in San Francisco. There were three errors, four wild pitches, two hit by pitches, fourteen walks including two walks with the bases loaded, and a few crucial baserunning mistakes. Chad Billingsley was unable to pickup the win and go 5-0 in April but the Dodgers managed to take the lead for lead for good in the 9th in a wild, crazy game.

Billingsley's command wasn't quite as sharp as usual. He had 3 walks but also left numerous balls up and gave up some base hits on good pitcher's counts. His final numbers were pretty good though, 7.1 innings, 3 runs (2 earned), and 8 strikeouts.

Jonathan Sanchez was even more wild. He had catcher Bengie Molina diving, jumping, and blocking balls all over the place to prevent Sanchez from throwing a wild pitch to every other batter. He had 3 walks in five innings and had to exit after that despite not allowing an earned run because he had already thrown 96 high effort pitches.

In the second inning left fielder Fred Lewis dropped a routine fly ball to left field allowing Andre Ethier to reach second base with nobody out. Two batters later James Loney hit an RBI single to score him and make the game 1-0.

In the third Billingsley hit Lewis and then gave up a single to Randy Winn. After Furcal made an error to give up a run a single by Travis Ishikawa gave the Giants a 2-1 lead. They still had the bases loaded but Juan Uribe grounded out to end the threat.

In the fourth Ethier scored again to tie the score when Juan Uribe threw James Loney's groundball into the Dodger dugout.

Matt Kemp's caught stealing in the sixth helped the Giants put up a zero despite allowing four baserunners in that inning. The Dodgers would get a similiar break in the bottom half of the inning when with two on and one out Emmanue Burriss hit a lineout to James Loney who then doubled off Travis Ishikawa at third to end the jam. Ishikawa didn't freeze on the line drive (even though he could have scored easily had the ball gotten to the outfield) and was a part of one of the many wasted opportunities in this game. The Giants hit into 3 double plays and also had Randy Winn thrown out at home in the first inning on a great relay by Matt Kemp and Rafael Furcal. Russell Martin blocked the plate and was just able to keep Winn from scoring on a bang-bang play.

In the seventh inning Manny Ramirez doubled to lead off and after loading the bases James Loney had a walk to drive in Manny and make the score 3-2. The threat was ended when Casey Blake bounced into a 1-2-3 double play on the next pitch. But Manny had a brilliant day, going 3-3 with 3 doubles and 2 walks.

In the eigth Billingsley stayed in despite already having thrown 99 pitches. After allowing two baserunners and only getting one out Jonathan Broxton came in to try to get the five out save. He walked Ishikawa to load the bases and then after a groundout he walked Rich Aurillia to tie the score.

In the ninth Manny had his third double, which was followed by an Andre Ethier double and a Matt Kemp triple to give the Dodgers a 5-3 lead they would never relinquish. Ethier's at bat was particularly good, he fought for 10 pitches after Russell Martin had struck out and finally hit a double that one hopped the wall in left center. Will Ohman came in for the bottom half of the inning and got the save.

It was a particularly crazy and enjoyable game and we were able to reach over 1000 comments in the two game threads. The win probability chart shows the ups and downs: 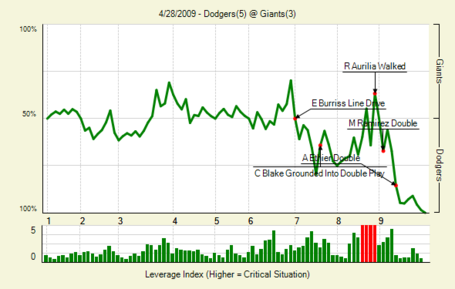 Tonight Eric Stults takes on 2008 Cy Young Winner Tim Lincecum. Runs will be at a premium so hopefully Stults has his best stuff. If the Dodgers can beat Lincecum they can take the series and finish their 9 game road trip with a winning record.