I didn't get to watch one second of Saturday's Dodgers/Giants game, but I did manage to listen to a few innings of Eric Stults's masterpiece on radio.  Then I read the game story by Jim Peltz of the LA Times, and was reminded of Stults's tough spring:

His latest gem in front of 41,425 came only months after his mother, Kathy, died before spring training.

Stults -- who also drove in a run with a single -- said he wasn't thinking about Mother's Day during the game, but "now that it's over I can think about it and be like, you know what, this is something special.

"Hopefully this will get us back on the winning track and I can go celebrate Mother's Day [today] with my wife and give my dad a call and tell him I love him," Stults said.

Selfishly, I always root for Stults to succeed since it's cool that an "Eric S." is contributing to the Dodgers.  However, today's game reminded me that I have a little bit more in common with Mr. Stults than just our names.

I don't have any memory of attending a major league baseball game with my mom.  There is a strong possibility that I was at a game with her when I was four or younger, but I have no recollection of it if it happened.  I have heard stories of my mom and older brothers and sisters getting to go to games and put their feet on the Dodger dugout, thanks to my dad getting tickets.  However, after my parents divorced when I was two years old, those family outings to Dodger Stadium were a thing of the past.

My mom didn't attend all my little league games, but it wasn't as if I was lacking in her support.  My siblings were 18, 17, 15 and 10 when I was born, so by the time my amateur baseball career rolled around, my mom had already logged far too many hours working the snack bar or being the little league mom, so it was understandable to miss a few games here and there.  My dad passed away when I was ten years old, and my mom worked full time to support me, so every second she spent watching me play baseball was a blessing.

One game she did watch me play was played at Angel Stadium in Palm Springs, the same stadium the Class A Palm Springs Angels played and where the big club would spend a few weeks every spring.  Early in the game, I fouled a pitch off that managed to hit the empty seat directly next to my mom, which sent her scurrying.  However, given my ability as a batter, I don't think the ball would have hurt had it hit her.  Later in the game, I fouled off another pitch that went to basically the same spot, only this one managed to hit her.  We had a good laugh at that.

My mom was a casual baseball fan.  My baseball watching buddy growing up was my grandma, who would keep score her own way, by listing the Dodger lineup and simply record what they did each at bat without regard to inning.  I have a feeling my grandma would have eventually loved fantasy baseball.  My mom's baseball calendar consisted of the All-Star Game and the playoffs and World Series every year.  I got my love of gambling from her, as she would organize the annual World Series "100 squares" pool at her work.

My mom watched quite a few games of baseball before I came along, and was understandably partial to Sandy Koufax and Don Drysdale.  During Orel Hershiser's amazing run to close out the 1988 season, I remember telling my mom that Hershiser was in the midst of the greatest pitching in history.  My mom smiled and said something like, "He's no Koufax." 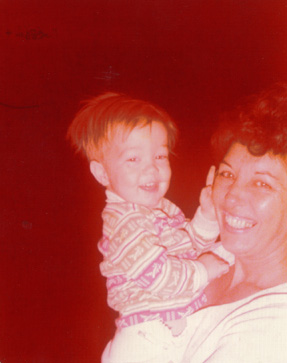 When I was 12, my mom sat down with me to watch Game 5 of the 1988 World Series, and cheered with me after Hershiser struck out Tony Phillips to clinch the title, although she didn't maniacally jump around the house like I did.  I recorded that game on the first of two VCRs my mom owned in her life.  This VCR had a corded remote, and an old school four-digit counter; for important sporting events I would record, I would be sure to write down important points in the game and the corresponding counter number in case I wanted to skip ahead.

My mom passed away in February 2008 after a nearly year-long battle with lung cancer, and a day hasn't passed that I don't miss her.  I was convinced the Dodgers would win the World Series last year, and my brothers and I would attend the clinching Game 5 at Dodger Stadium on her birthday, October 27.  Well, the World Series did end in five games, but the Dodgers came up just short.

Nevertheless, baseball gives me fond memories of my mom.  She taught me a lesson in how to take losses when, as a 12-year old I threw a bit of a tantrum when the Dodgers blew Game 1 of the 1988 NLCS to the Mets.  She even bought me a pair of those flip-top sunglasses when I was in little league so I could -- at least in my mind -- look like a big leaguer.

I got my sense of humor from my mom, so she would appreciate the great Ralph Kiner, who once told his audience on a Mets' broadcast, "Today is Mother's Day, so happy birthday to all you mothers out there."