The Dodgers lost to the Giants 7-5 in a thrilling game that lasted 13 innings. Poor managing and some bad luck cost the Dodgers today even after battling against Tim Lincecum and getting four runs off of him.

Juan Pierre once again stepped up big, going 3-5 with a RBI double, a walk, and 3 runs. He finishes the series a scalding 7-10 with 3 doubles and 2 walks. His opposite was Andre Ethier went 0-5 and finished up an abysmal 1-14 with a walk in the series. Pierre was the only starter with more than one hit, but Casey Blake did go 3-3 with a home run off the bench.

Jeff Weaver worked out of jams to get through five innings, though he did allow three earned runs and had 4 walks and only 2 strikeouts. The score was still 4-3 in the seventh, but the Dodgers' patience paid off, Lincecum had 110 pitches after six innings and had to be pulled.

But problems had already begun to arise, as Joe Torre took out Ramon Troncoso after a strikeout and single to put Wlll Ohman in against lefties Travis Ishikawa and Fred Lewis. If you ask me, Troncoso should have stayed in against them because his abilities make up for the lack of the platoon split.

In the seventh, Ronald Belisario looked fantastic, hitting 99 MPH on the radar gun and retiring the heart of the (admittedly weak) Giant's lineup in order. Yet after allowing a weak infield single to start the eigth, Belisario was relieved by Cory Wade. This move was even more puzzling because Belisario had been great and Cory Wade is also a righty, so there was really nothing to be gained by putting him in. Aaron Rowand hit a line drive that was possibly catchable but Ethier let it drop, and then Emmanuel Burriss reached on a bunt single (their second of the day) to load the bases. Fortunately, the Giants only got one run but still, the score was now tied 4-4.  In the three innings the Giants scored to tie the game at four, only two hits left the infield. The Giants managed to capitalize on walks and some well placed ground balls.

The game was quiet until the 12th, as Jonathan Broxton pitched two scoreless innings followed by a James McDonald scoreless inning. But in the 12th Guillermo Mota had to be brought in because only he and Brent Leach had not been used yet. Mota predictably struggled and the Dodgers were lucky to only be down one as Brian Wilson came in to save it for the Giants. Casey Blake had other plans. He hit a home run that just edged over the fence in the left field corner, giving Wilson his second blown save of the year.

However, Mota pitched again in the 13th inning and this time he allowed two runs. Again the Giants had two well placed infield singles, one on a ball Rafael Furcal double clutched and was just late getting the force at second. Had he gotten the out Mota could have walked Randy Winn and faced Brian Wilson with the bases loaded because the Giants had no position players left on the bench. Instead he had to pitch to Winn and Winn's 2 RBI single to put the Giants up 7-5, the difference in the game.

Here's the win probablility chart for the game. The Dodgers definitely had their chances: 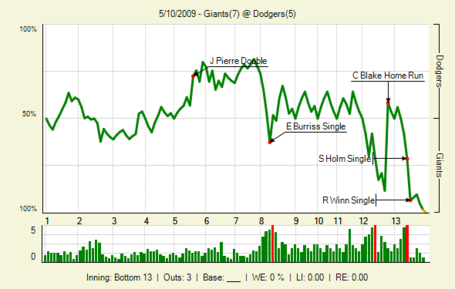 The Dodgers get the day off tomorrow, their first in a while after 20 straight games. On Tuesday they start a three game set in Philadelphia, with Clayton Kershaw taking on old friend Chan Ho Park at 4:05 PM. The Phillies should be a good matchup for Kershaw, as their three best hitters (Chase Utley, Ryan Howard, and Raul Ibanez) all bat left-handed. Even with the loss, the Dodgers are still 4.5 games up on the second-place Giants.

Manny Ramirez also apologized to Frank McCourt for his 50 game suspension after McCourt demanded that he meet with his teammates.

Hopefully everyone had a happy Mother's Day!