This week featured many highs and many lows.  On Wednesday night, as the Dodgers set a major league record for consecutive home victories to start a season (13), the Dodgers invited various Dodger bloggers to discuss the state of the team.  Dodger Vice President of Communications Josh Rawitch was our gracious host, and we also got to meet General Manager Ned Colletti, various Dodger employees, and DodgerTalk hosts Ken Levine and Josh Suchon.

Dr. Charles Steinberg, the club's Executive Vice President of Creative and Communications, spoke to us as well, and he even answered my frivolous question about "Don't Stop Believin'" by Journey.  Basically, Steinberg and the club are listening to the fans, and if they see something works or doesn't work, they are willing to adapt. 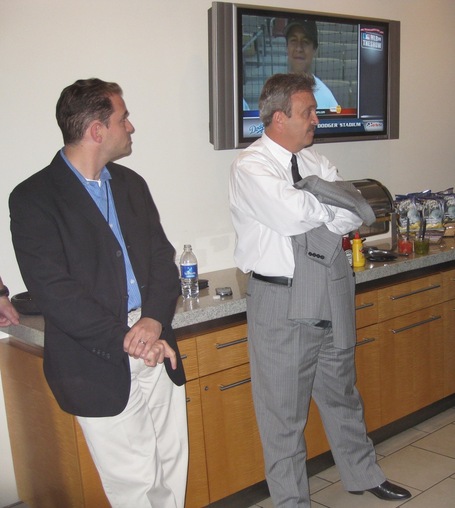 The most important news from blogger night was that the Dodgers are going to start giving bloggers access to cover the team.  It's clear the club is open to new media, and we'll see how this inreased access to the team will help our coverage here (I wasn't able to take advantage of this access during this homestand, but I plan to the next time the club is in town).

The next morning, I was hard at work, and happened to not be listening to sports radio at that moment, when I received a text from my friend Jacob.  The text had but four words, and they all rhymed with "duck."  Within a minute, I found out he was talking about the Manny Ramirez suspension for failing a drug test.  That set off a whirlwind of activity and reaction the likes of which the Dodgers haven't seen in some time.  On True Blue LA, we set a record for hits in a day, nearly six times our previous record.

On the field, the Dodgers played well even with a few frustrating losses.  By finishing the week 4-3, they ended with the same division lead (4½ games) that they started the week with.

Dodger Pitcher of the Week:  With two wins this week, including a masterful shutout on national television Saturday, Eric Stults takes this week's award.  Jonathan Broxton gets honorable mention here for retiring all 12 batters he faced this week, six by strikeout.  Dating back to April 30, Broxton has retired 18 consecutive batters, 11 by strikeout.

Upcoming Week:  The Dodgers get their first day off in three weeks on Monday, then travel to Philadelphia and Florida for a pair of three-game affairs.  If the pitching rotations continue as scheduled, Thursday's getaway game -- a 10:05am start time -- in Philadelphia will feature Chad Billingsley against Cole Hamels.