Casey Blake Created Some More Intensity in the Giants-Dodgers Rivalry

Share All sharing options for: Casey Blake Created Some More Intensity in the Giants-Dodgers Rivalry 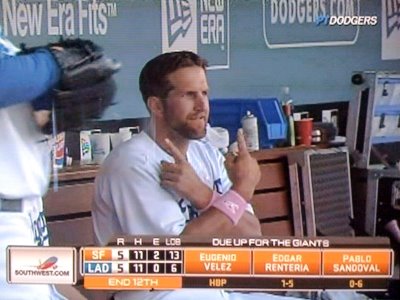 Or maybe Brian Wilson is just being a baby. But it seems that there may be even more bad blood between the Dodgers and Giants the next time they meet. In the 12th inning of yesterday's game Casey Blake launched a home run off of Giant's closer Brian Wilson to tie the score. After Blake got into the dugout he mocked Wilson's celebration that he does after each save, which can be seen here. This was apparently quite upsetting to Wilson, who has said that he makes the cross because of his religious beliefs and in honor of his late father.

According to the San Francisco Chronicle

"One by one, the Giants visited Wilson in the clubhouse... to console him after a friend sent to Wilson's cell phone an image of Blake mocking the cross-armed gesture the closer makes after each save... Wilson seemed very distraught about the incident.

Wilson wasn't eager to discuss the incident. Asked if he might talk to Blake the next time they meet, Wilson stood silent. (Giants reliever) Jeremy Affeldt, standing in the next locker said, 'Blake knows what he did.'"

I personally thought the whole thing was very funny. I hate seeing Wilson's celebration after every save because I think it looks kind of ridiculous. And if you are going to celebrate in an outgoing way, you should be able to handle when people make fun of your celebration. I know that it means a lot to Wilson, but there is still a point where you cross the line for what you can do on the baseball field and not have people think you are showing them up. Interestingly enough, the same thing happened in Baltimore yesterday, with Aubrey Huff mimicking Joba Chamberlain's fist pump at home plate after he hit a home run off of Joba.

However, some Giants fans don't feel the same way. Talk radio in the Bay Area is buzzing with people and hosts who think Casey Blake is a punk (and some other words) and he will get drilled the next time the two teams meet up. He's apparently the new most hated Dodger in San Francisco. It will take a while to find out, the next Dodgers-Giants series isn't until August, but it should be interesting to see if this is still a story then. Anything that makes the rivalry more fun is okay by me.