Schmidt Takes Another Step On The Long Road To Recovery

Share All sharing options for: Schmidt Takes Another Step On The Long Road To Recovery 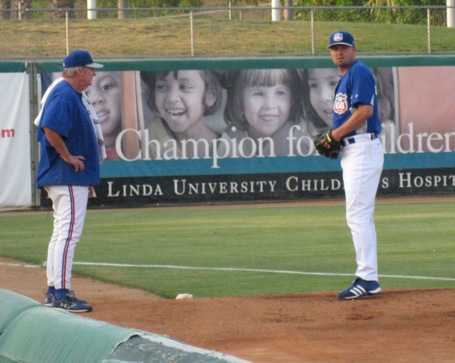 Jason Schmidt, who hasn't pitched in a major league game in 696 days, joined the Inland Empire 66ers on Tuesday for a rehabilitation start.  Schmidt had mixed results in the 2-0 loss to the Stockton Ports.

Schmidt faced four batters in the first, and despite nobody hitting a ball in fair territory he gave up an unearned run.  Jermaine Mitchell of the Ports drew a one-out walk, and proceeded to steal second base.  Two errant throws on the steal attempt, one by catcher Kenley Jansen and the other by centerfielder Trayvon Robinson, allowed Mitchell to score what would end up being the only run the Ports would need.  Schmidt struck out three in the first inning.

The stadium radar gun was turned off during the game tonight, but luckily I found two Ports' pitchers charting pitches behind home plate.  Around the 4th inning, I asked them for a read on Schmidt, and they said he was between 85 and 90 mph, and that he hit 90 "a couple of times."  This was confirmed later by pitching coach Charlie Hough, who also said Schmidt averaged roughly 86 mph in his five innings.

Schmidt pitched into the sixth inning, and ended up allowing two runs, three hits, and four walks in his five innings while striking out six.  Hough noted how Schmidt's performance had it's ups and downs:

When he tried to throw hard, he lost his location.  His good pitches were pretty good, his poor pitches were not very good, in that they weren't close to what he was trying to do.

Even though Schmidt said he felt fine after the start, the key was not so much the results from tonight but rather how Schmidt will respond in his next start, as of yet undetermined.  Said Hough:

There are a lot more questions to be answered in his endurance.  The question is can he throw 95 pitches relatively solid, and bounce back in 5 days.

Schmidt, although he said his "goal was to get back a month ago," seems determined to help the team with which he signed a three-year, $47 million contract:

It's not always about the contract, it's about helping the team you signed with.  I can be that guy that helps the Dodgers get over the hump in the playoffs.

Back to the game, 2002 Dodger draftee Greg Miller entered the game with the bases loaded and nobody out in the sixth inning.  Miller induced a double play grounder and only allowed one inherited runner to score.  Hough thought it was a matter of Miller, who has battled control problems in the last few years, trusting his stuff:

If he throws the ball right, they won't hit it often enough to beat him on a regular basis.  Tonight was as good a performance as I've seen from him, in the clutch in a 1-0 ball game, facing a lefthander, and he threw it great.

Hough also talked about James McDonald, who visited his former pitching coach last weekend after losing his starting job with the Dodgers.  Hough said he thought it was simply a case of McDonald trying to do too much:

It can be a combination of both, where you start thinking about throwing strikes instead of making your pitch.  You fall apart mechanically, and it's kind of a vicious circle.

Tonight was my first game at Arrowhead Credit Union Park.  There are some more pictures after the jump.

Here's a look at the front entrance to the stadium: 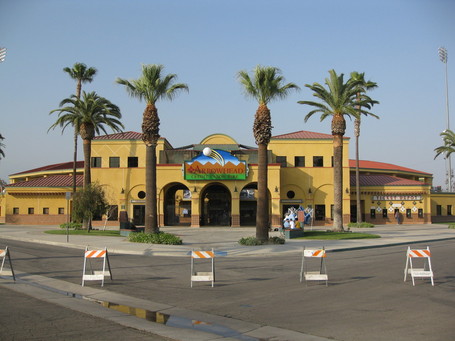 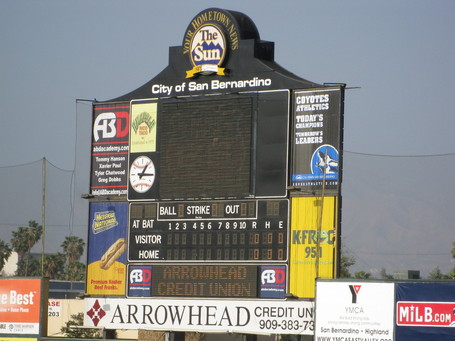 ...and the retired numbers: 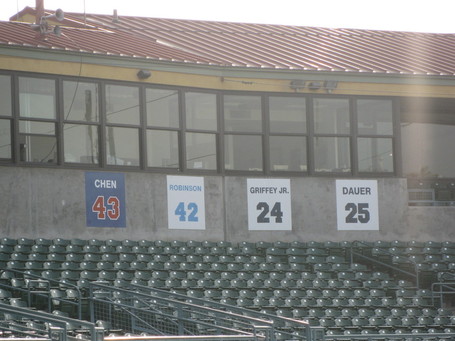 July 17 should be a fun promotional night: 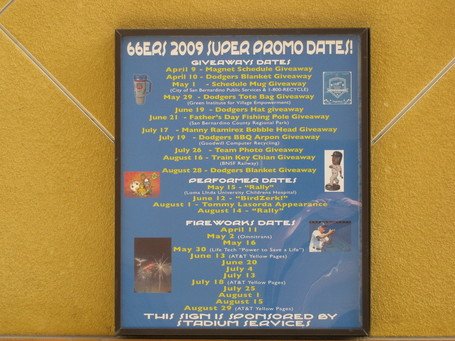 A look at a former San Bernardino star: 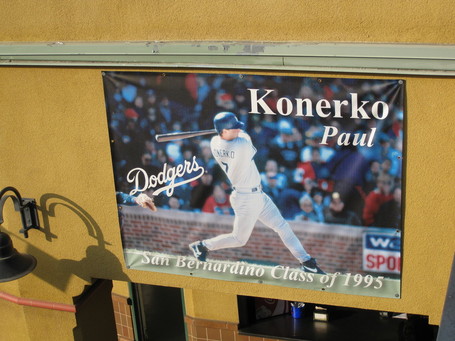 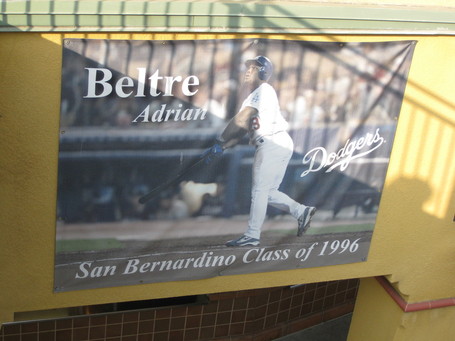