Share All sharing options for: Withrow, 66ers Fall To Storm 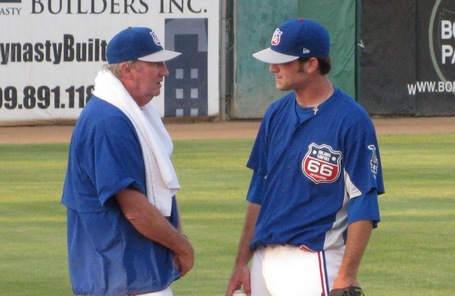 I headed down to San Bernardino Friday night to watch Chris Withrow pitch in person.  The 20-year old Withrow was rated as the 9th best prospect in the Dodger organization by Baseball America, and I wanted to get a look before he moved on to bigger and better things.

However, Withrow had his worst outing of the season, lasting only 3.1 innings as the Lake Elsinore storm defeated the Class A Inland Empire 66ers, 8-5.  Withrow allowed eight hits, seven runs, and two walks while striking out five. 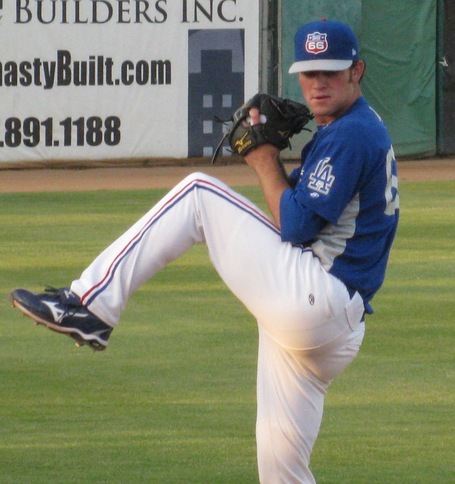 Withrow's stuff is apparent.  He threw in the low 90s many times (I'm unsure of the exact range since I'm told the stadium radar gun is notoriously slow, in some cases by 3-5 MPH).  He even broke off a few nice curves.  However, Withrow lacked command on this night, and paid the price.

Even though Withrow walked only two batters, he left many pitches up, and got hit hard a few times.  Logan Forsythe, the 46th player taken in the 2008 draft, by the Padres, hit a home run to left field and a booming double high off the wall in right field.  Withrow's first five outs were strikeouts, but in between Lake Elsinore plated four runs.

The 66ers, who set a season high with 5,256 in attendance, sent the tying run to the plate in the ninth inning, but Eduardo Perez struck out and Scott Van Slyke flew out to end the game.

Jason Schmidt is scheduled to make his second rehabilitation start for Inland Empire on Sunday afternoon, and I will be there to cover the game.