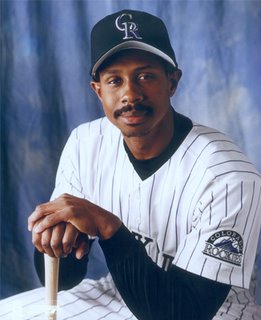 Who is this Juan Pierre imposter?
Juan Pierre must be channeling Manny Ramirez's inner-spirit as he's been absolutely on fire since Manny's suspension on May 7th. His line since Manny's suspension is a sizzling .465/.511/.674 for a 1.185 OPS. Over the 10 game span Juan has gone 20-43 with 4 walks and only 1 strikeout. To put this in perspective, Manny has never reached base more than 24 times (the amount of times that Pierre has reached) in 10 games in his Dodger career.  The closest that he came was his first 10 games as a Dodger when he tied Juan by going 19-40 with 5 walks and 5 strikeouts.
Pierre has 7 doubles and a triple in the 10 games. His 8 extra base hits are only 5 less than he got all of last year! Even in 2007 when he had 729 plate appearances he only had 32 extra base hits, so he got a quarter of that in the last 10 games.
Juan also received an an intentional walk yesterday, only the 6th of his career. Clearly he's getting more respect as a run producer! Seriously though, he's had 11 runs and 9 RBI's in the last 10 games. He only had 28 RBI's all of last season and just 3 in 2009 before Manny was suspended. So in his last 140 games before Manny's suspension, Pierre had 31 RBI's. In the 10 games since the suspension, he's got almost a third of that total!

As Phil pointed out in the game recap yesterday, Pierre has a .476 BABIP over the 10 day span, meaning there's no way he can sustain anywhere near this kind of production, but this is still a pretty remarkable performance.