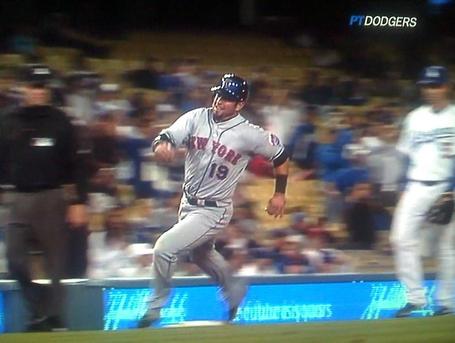 When things are going well, sometimes you just have to shake your head and laugh.  Baseball has proven itself time and again to be a crazy game, and its best to enjoy when good fortune comes your way, and not get too discouraged when nothing seems to go right.  Tonight, the Dodgers came out ahead in the fortune department, and defeated the Mets 3-2 in 11 innings, to improve to 15-3 at Dodger Stadium on the year.

For the Dodgers, tonight had all the earmarks of one that got away.  Randy Wolf provided yet another strong start, pitching 7.2 innings, giving up only two runs in his longest outing of the season.  When Wolf left the game in the eighth inning, he was leading 2-1 with Angel Pagan on second base, and Cory Wade was summoned to face old friend Gary Sheffield.  Sheffield, known for the screamingest of line drives throughout his long and illustrious career, hit a 37-hopper to the right side.  Orlando Hudson, shifted almost behind second base with Sheffield up, got to the ball on the grass, then made a strong throw home, but Pagan somehow touched home plate before Russell Martin applied the tag, and the game was tied at two.

Of course, it was only tied at two because the Dodger offense took a siesta after scoring two runs in the first off Tim Redding.  After an 18-pitch first inning, Redding settled down to allow only two walks in his final five innings.

In the top of the 11th, a tiring Ramon Troncoso took the mound for his second inning, and the Mets took advantage.  After two line drive outs, Ryan Church singled, setting up Angel Pagan for the at-bat of the night.  Pagan smoked Troncoso's 37th pitch into the right-centerfield gap for a triple, easily scoring Church for the go ahead run.

However, Church never touched third base.  Mark Loretta noticed -- he told Michael Eaves of Prime Ticket that he didn't "have anything else to do but look at third base, and [Church] obviously missed it,"-- and so did Joe Torre, so the Dodgers appealed to third base, and Church was called out, ending the now-scoreless inning.  To add insult to injury, Pagan was only credited with a single, because technically Church only advanced to second base!

After a Mark Loretta walk to begin the bottom of the 11th, Xavier Paul lofted an easy fly ball to left-centerfield.  However, neither Carlos Beltran nor Pagan could decide whom would catch it, and the bal dropped for a two-base error, the Mets' fourth error of the evening.

With runners on second and third and nobody out, Juan Pierre was walked intentionally -- for the second time in as many days -- bringing up Rafael Furcal with the chance to be the hero.  The Mets brought in Beltran to have a five-man infield, the "pulling the goalie" tactic.

Furcal, who did have two hits in six at-bats, flew out to shallow left, not deep enough to score the winning run.  That brought up the O-Dog, who grounded to first baseman Jeremy Reed, in what appeared to be a shot at an inning ending double play, or at least a force at home for the second out.  However, Reed's throw home was well off target -- the Mets' fifth error of the night -- and the Dodgers won their fourth walkoff game this season.

On the injury front, Ken Gurnick of MLB.com tells us Eric Stults and his jammed thumb appear OK to start Wednesday, and Hiroki Kuroda feels fine after a simulated game.  Kuroda will need at least a few rehab starts, and on the radio broadcast Charley Steiner said if all goes well, Kuroda might be back by the first few days of June.