Why Was Weaver More Successful Than McDonald?

Share All sharing options for: Why Was Weaver More Successful Than McDonald?

On Thursday against the Padres James McDonald made what may be his last start with the Dodgers for awhile, going only 1.2 innings and allowing 3 earned runs and 4 walks with 0 strikeouts. In his relief Jeff Weaver pitched 4 scoreless innnings with 1 walk and 4 strikeouts. What were the differences in their outings? Let's take a look. 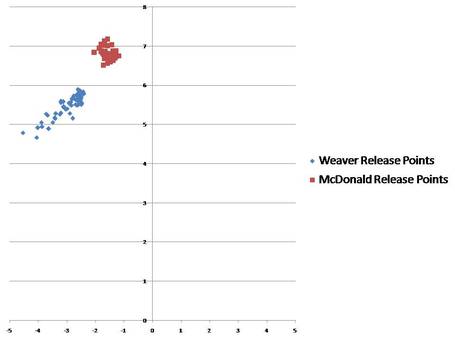 This first graph is just a comparison of their two release points (graphs are in inches, from a catcher's point of view). McDonald comes from a simple over-the-top arm angle, and is very consistent. Weaver has a three-quarters arm angle and his arm slot seems to change from pitch to pitch. This is not generally a good thing for pitchers because it messes with their control but it can be effective as a method of deception (think Orlando Hernandez), as long as the pitcher can control their arm slot. We'll see how this works for Weaver in the future, but it was certainly effective against the Padres. 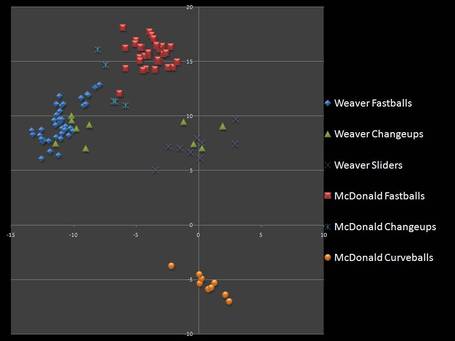 This next graph shows movement of both Weaver and McDonald's pitches. From the graph, you can see that McDonald has a very straight fastball while Weaver's has a lot more tail on it. On average, Weaver's fastball tailed almost six inches more than McDonald's (9.45 inches to 3.87 inches). James McDonald's changeups had similiar horizontal movement, but Weaver's were in two different spots, meaning he probably never had a good feel for it. Luckily for him he wasn't punished, the only two times his change was put in play were for outs. The two pitchers' breaking balls are vastly different. Weaver's slider is similiar in look to his fastball but with no tail. McDonald has a big 12-6 curveball with a lot of vertical drop.

After the jump we'll look at the results of each pitcher's offerings. 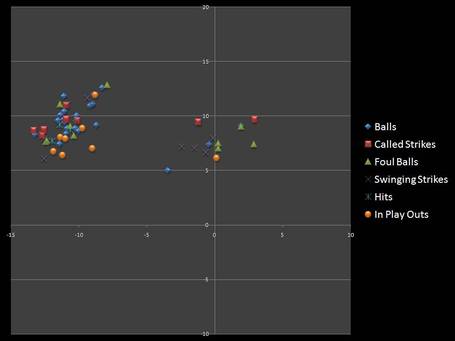 This graph shows the results of Weaver's pitches. It is still divided up by movement, so his fastballs are on the left and sliders on the right. One factor that helped limit walks was that Weaver threw first pitch strikes to 12 out of the 17 batters he faced. All four hits off of him were on fastballs (his average fastball velocity was only 89.6 MPH compared to McDonald's 91.4 MPH), but he also fooled hitters in ways McDonald couldn't. He threw four fastballs and four sliders for swinging strikes. His deception and extra movement on his fastball apparently made up for the fact that he doesn't throw as hard as McDonald. Also, Weaver threw 8 of his 9 sliders for strikes and 5 of his 9 changeups. The swings and misses combined with hitting the zone early kept him out of trouble. 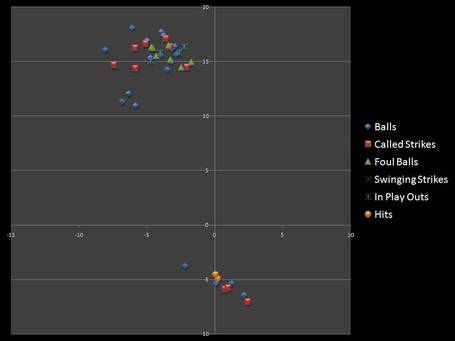 Here's a graph of the results of McDonald's pitches. The first thing that jumps out at you is that he only had one swinging strike (compared to Weaver's eight), on a changeup. When you're not fooling anybody, you won't be getting many strikeouts (McDonald had zero) so you need to throw strikes and make the hitter put the ball in play. McDonald did a decent job getting first pitch strikes (5 out of 10) but he couldn't control any of his off-speed stuff as the count moved along and he looked for the strikeout. He threw only 3 of his 9 curveballs and 2 of his 5 changeups for strikes. 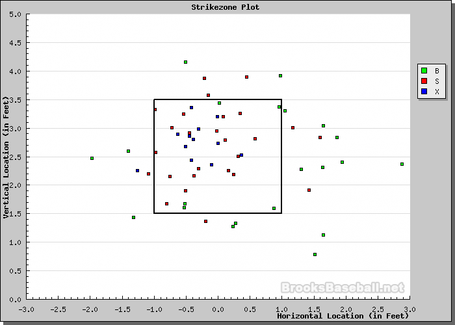 This is a location chart for all of Weaver's pitches. You can see that he was around the zone most of the time. 24 of his 59 pitches were below the middle of the strike zone, so he was keeping the ball down well. Also, he got hitters to chase out of the zone nine times, and they only managed to put the ball in play once on those swings. Getting hitters to swing at bad pitches is key in preventing hits and boosting strikeout totals. 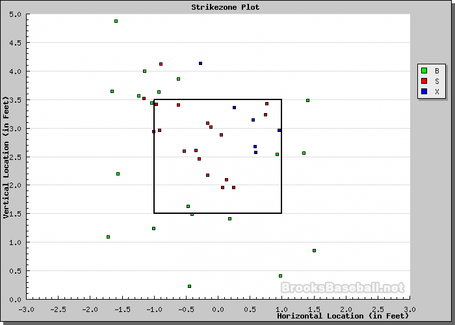 This is McDonald's pitch location chart. Only 12 of his 49 pitches were below the middle of the strike zone, revealing his wildness and inability to locate the ball where he wanted to. He only managed to get hitters to chase a pitch out of the strike zone three times, so they were able to wait until they got a good pitch to hit. If McDonald isn't going to keep hitters off balance he must be perfect with his location, and he was far from that on Thursday.

Jeff Weaver had a stellar day and he earned it. He threw strikes and was deceptive enough to keep hitters off balance. Meanwhile, James McDonald was wild and couldn't disrupt the batters' timing at all, with only one swinging strike in the ten batters he faced. That's why the next time through the rotation it will probably be Weaver getting the start and McDonald coming out of the bullpen.