Dodgers Look To Rebound Against Angels

Share All sharing options for: Dodgers Look To Rebound Against Angels 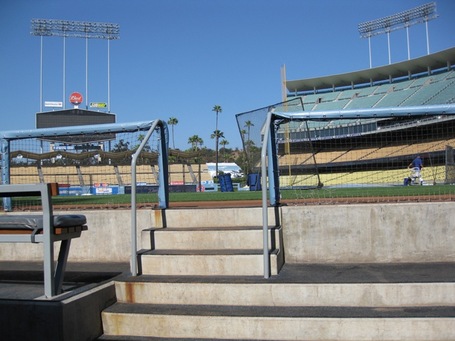 It's hard to find fault in a 3-1 homestand, but the Dodger offense hasn't exactly been stellar on the homestand. Last night the Dodgers were one for 14 with runners in scoring position, and are five for 44 in such situations during the homestand.

John Lackey, who owns the second-best ERA in interleague play history at 2.52, starts for the Angels. This will technically be Lackey's third start of the season, but his first start last Saturday in Texas was cut short after two pitches, as Lackey was ejected for hitting Ian Kinsler of the Rangers.

Randy Wolf starts for the Dodgers. According to the Dodger game notes, Wolf is second in the NL by holding lefties to an .093 average (4 for 43). He's second to teammate Jonathan Broxton, who has allowed lefties to hit .083 (3 for 36).

Joe Torre said that of his bullpen, only Wade would be unavailable tonight. Also, Eric Milton will probably be throwing a bullpen session later in the game, so don't be alarmed thinking he's warming up to enter tonight's game.

I will have more Torre pre-game quotes up in a bit.

I learned many things during and after Joe Torre's pre-game session with the media, first and foremost hold your recorder closer to the subject if you want to hear their quotes clearly. Lesson learned! Here is a summary of Torre's media session:

I got to meet with Dylan Hernandez of the LA Times, Josh Suchon and Ken Levine of KABC's DodgerTalk, and Michael Becker and Jim Alexander of the Press-Enterprise. All were very helpful in showing me around, as were Joe Jareck and Josh Rawitch of the Dodgers. I'll post some more pictures in a little while.

On my way up from the clubhouse to the press box, I was running to catch the elevator. The man who held the elevator for me was none other than Tommy Lasorda. When I got to the press box, I stopped to get something to eat, and passed by a golden-voiced announcer. Just being in Vin Scully's presence is amazing. Then, as I was eating, none other than Fernando Valenzuela was standing less than five feet from me on his phone. I'm telling you, I could get used to this!

Sitting next to me in the "Dodgers Blog Spot" is Jimmy Bramlett of LAist, who is live-blogging the event for his site. Here are some photos I snapped so far:

Here's my Moonlight Graham moment, in front of the Dodger dugout... 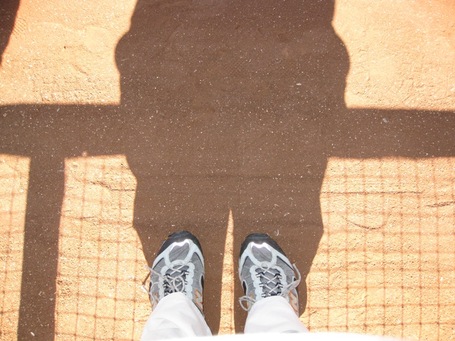 Here's a shot of the 1965 World Series celebration, on the way to the field... 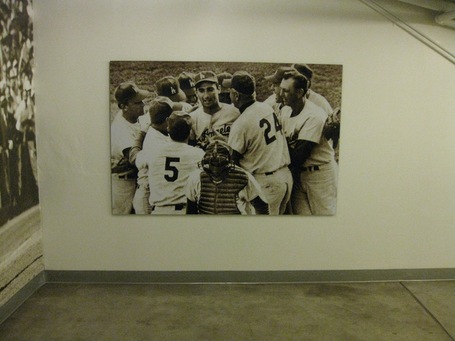 And a shot of the retired jerseys of Don Drysdale, Pee Wee Reese, and Duke Snider... 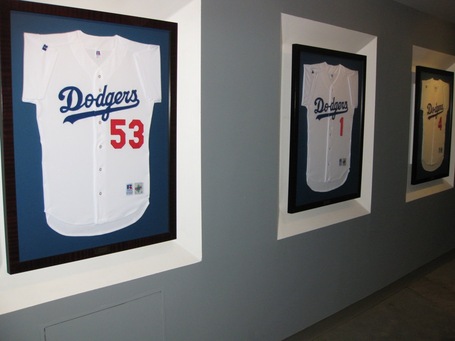 Here's a look at the field just before batting practice... 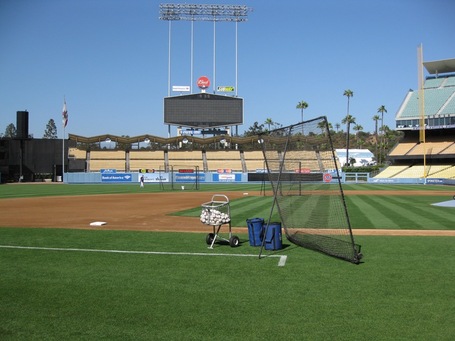 And Casey Blake during batting practice... 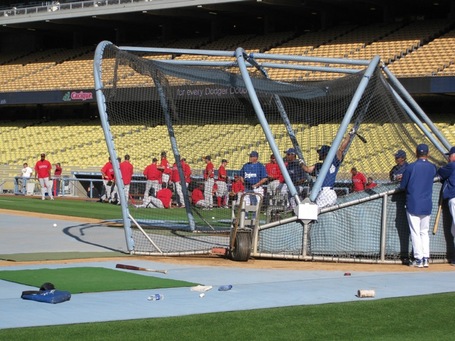 Here's a closeup shot of the Dodger logo on the field...

And, finally, a shot of the field from the press box just before first pitch... 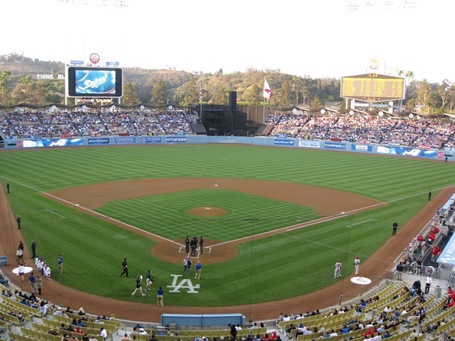 Boy, that Torii Hunter home run was a bomb, into the Dodger bullpen! I got to see the end of the Laker win in Denver standing next to Mike Brito for a fleeting moment. Then I went in to the dining area to get a cookie. The overwhelming awesomeness when I opened the container where the cookies are kept produced an aroma so sweet, so inviting, that everyone of you would punch your own mother or grandmother in the face for never making cookies this good.

It's 4-1 Angels entering the bottom of the fifth inning, and there's still plenty of time for a comeback I can't cheer for!

Right after the Hunter homer, the Dodger offense awakened with two runs of their own, after starting the bottom of the fifth inning with two quick outs. I thought I would have no problem obeying the "no cheering in the press box" rule since I am a normally quiet person, but my instincts have wanted me to cheer many, many times already tonight. It's crazy how often that happens. I haven't really cheered outwardly, other than the quick applause for the USC Hospital guy throwing out the first pitch (they were playing the fight song, after all), but it's been a physical challenge to keep myself from doing so. 4-3 Angels with one out in the top of the 6th...

I just ate the best kind of Dodger Dog -- a free one -- after a wonderful rendition of God Bless America by Lorelei Sinco, a 16-year old with a beautiful voice. She nailed the national anthem as well. Great job. Here's a shot of the field in the 7th inning... 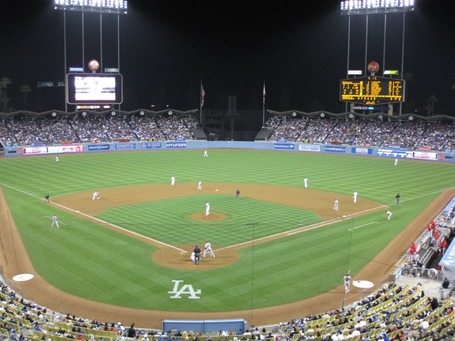 Get Your Guesses in for "Just A Bit Outside" here.