Another night, another close game between the Angels and the Dodgers.  Only tonight, the Dodgers were able to do some damage with runners in scoring position.  Coming into the game, they had five hits in 44 at-bats on the homestand with RISP, but tonight they went four for 14 and more importantly had some key walks, including the final bases-loaded game-ender to Juan Pierre.

The Dodgers' 5-4 win was the third walk-off win of the season for the club, one that Joe Torre said has been able to channel any frustration, such as the recent offensive struggles, into a fierce determination:

You know, we kept coming at people.  That's what this club's been doing.  We haven't been hitting a whole lot.  Tonight we got some key things done and they came out of that bullpen and pitched very well too.

Torii Hunter, who did his damage Friday night with the glove -- robbing the Dodgers of two potential extra-base hits -- made some noise with his bat tonight, including a three-run home run in the fifth inning to put the Angels up 4-1.  At that point, down three runs against John Lackey was "a tall order," said Joe Torre.

Randy Wolf allowed ten hits and four runs, including the homer to Hunter, but more importantly he pitched into the seventh inning, reducing the workload of the bullpen.  Jonathan Broxton threw 30 pitches over his two relief innings for his fifth win of the season.

Torre said the availability of Broxton and Ronald Belisario (40 pitches in the last two games) would be determined tomorrow after they play catch.

Andre Ethier left the game after the bottom of the seventh inning with a split nail on his right big toe, as a result of getting hit by a Lackey pitch on his foot, and is day-to-day.  Torre said Ethier would likely sit out tomorrow, along with scheduled days off for Russell Martin and Rafael Furcal.

Chad Billingsley takes the hill against 30-year old rookie Matt Palmer in the series finale Sunday.  Torre praised his ace, sayng "we have our best going right now and hopefully we can give them some runs to work with."

POSTSCRIPT:  I don't have much to add, other than this was one of the coolest experiences of my life.  Once I have some time to reflect on the events of today, I'll write a coherent recap.  In the meantime, here's a shot of the field long after the game is over: 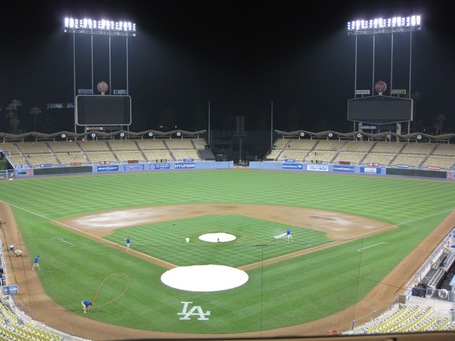