The Dodgers start a week-long road trip in Colorado, with a day game on a holiday Monday.

Eric Stults makes his first start since ten days ago in Florida, after missing a start with a jammed thumb on his left hand. Jorge De La Rosa starts for the Rockies.

Jonathan Broxton is tied with Oakland's Andrew Bailey for the most strikeouts in baseball by a reliever, with 35.

Andre Ethier is out of the lineup again today, and Blake remains in the cleanup spot. Rafael Furcal was in the original lineup, but appears to have been a late scratch. Today's Dodger lineup:

The Dodgers, along with every other team in Major League Baseball today, will wear red caps, with a special red, white, and blue design in the logo. While I appreciate the sentiment behind this promotion, I find it ridiculous that the Dodgers will wear these hats when they take the field today: 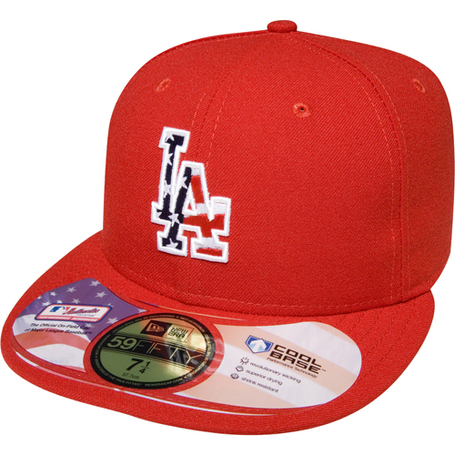 All MLB clubs will also wear these hats on July 4 and September 11.

What cap should the Dodgers wear today?

This poll is closed