The Dodgers lost 2-1 to the Cubs today at Wrigley Field. Chad Billingsley was the tough luck loser, losing to Ted Lilly despite allowing only two runs over seven innings.

Billingsely did a great job getting out of two different jams. The Cubs had runners on second and third with nobody out in the 2nd inning but  Chad retired three straight hitters to prevent any runs from scoring. And then in the 6th Kosuke Fukudome lead off with a double and got to third when Andre Ethier let the ball roll under his glove. But Chad got three straight ground balls with the infield in to leave him stranded at third.

The game remained scoreless until the 7th inning, when Matt Kemp hit a solo homerun that just cleared the wall to give the Dodgers the lead. The home run was Matt Kemp's first extra base hit in his last 14 games.

But Koyie Hill made sure the lead didn't last long, homering on the first pitch of the bottom half of the 7th. The Cubs loaded the bases and Kosuke Fukudome hit a sacrifice fly to give the Cubs a 2-1 lead.

In the 8th inning Rafael Furcal had a leadoff walk against set-up man Carlos Marmol. Juan Pierre tried to bunt him over but was hit on the knee on an 0-1 pitch where he pulled the bat back to get out of the way. The ball also went to the backstop, which could have at least allowed Rafael Furcal to get to second base, but the umpires mistakenly ruled that Pierre offered at the pitch. Because it was ruled a dead ball Furcal had to go back to first. Pierre subsequently grounded into a double play which replays showed he was actually safe on as well. The umpires calls cost the Dodgers two baserunners and possibly runs as well. These calls tend to even out, but it was tough to take in such a close game.

Brent Leach pitched a scoreless inning and the Dodgers got two men on in the ninth, but Mark Loretta grounded out to end the game. James Loney struck out in the ninth inning to get his first career golden sombrero, an ignonimious honor for when a hitter strikes out four times in a game. Loney has now struck out in five straight plate appearances after striking out only 15 times in his first 211 plate appearances.

Here's the win probability chart for the game: 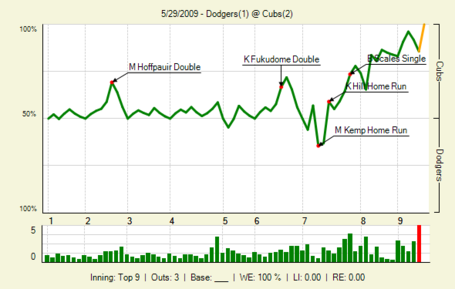 Good news for the pitching staff, Hiroki Kuroda will be inserted back into the rotation on Monday. The move comes despite Kuroda allowing seven runs in five innings in his last rehab start for High-A Inland Empire. Kuroda has been on the DL since Opening Day because of a strained oblique.

Joe Torre doesn't think Manny Ramirez should be in this year's All-Star Game. When asked if Manny should be an All-Star, Torre said:

"No, I don't, and if you ask Manny, he'd give you the same answer," said Torre. "I understand a lot of it is a popularity contest and you want to give the manager the best players, but to me, the significance of the All-Star Game is to reward players who had a good first half. "

Torre did show support for a few Dodger players, including Casey Blake and Orlando Hudson:

"My third baseman and second baseman -- those two guys are standouts," Torre said. "[Jonathan] Broxton and [Chad] Billingsley, but with pitchers, they can't take them all."

Tommorow there is another day game as Eric Stults takes on Ryan Dempster at 1:10 PM. A win would be nice because Eric Milton will be going on Sunday.