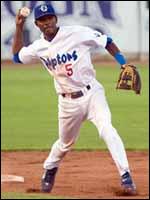 Dee Gordon finished a torrid week in style with three more hits but he's not the only Loon doing damage from the offensive end. Below was the starting lineup today and as you can see the first six hitters are hitting over .300 with the Gordon/Pedroza combo setting the table for Gallagher, Delmonico, and Russell. At the moment the Loons have four players in the top 10 batting average leaders for the Midwest League

Gordon had 14 hits for the week and collected three hits in four games, including three triples and his first home run of the year.

Isotopes:
Jeff Weaver was the first of the retreads to get the call to the big club and he immediately provided dividends by relieving a bewildered James McDonald and throwing 4 innings of shutout ball. Eric Milton and Estes continued to make their case to be considered the next time the Dodgers need to dip into the minor league coffers for help by pitching solid games.  Milton finally gave up a run but still pitched a solid game and this time it was at Isotope stadium. Knuckleballer Charlie Haeger doesn't want to be forgotten and made his case with a complete game on Thursday Night.

Chattanooga Lookouts:
When Kuo went on the DL, Brent Leach got the call instead of Garate and he deserved it with a string of scoreless games.  Coming back to AA was Scott Elbert and he was immediately inserted back into the rotation. He started on Sunday and went five innings, allowing zero earned runs.  Josh Lindblom went on Saturday Night with good results as he pitched five shutout innings. The only concern was the single strikeout.

Inland Empire 66ers
Phil favorite Kenley Jansen hit his first home run of the year today driving in four runs to lead Inland Empire to a route against Padre Baek who was doing a rehab start.

Great Lake Loons
Strangely Ethan Martin pitched in relief today throwing one inning of shutout ball. Javy Guerra continues to dominate at this level and has now picked up seven saves with 17 K's in only 12 innings of work. We already talked about the hitters on the front page.