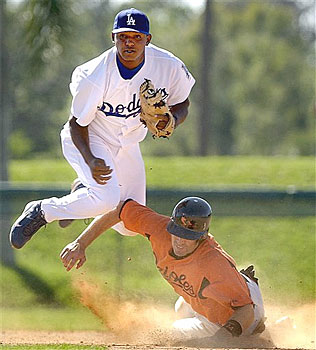 Isotopes:
Rained out. With Jeff Weaver showing the doubters that the retreads do indeed have some street life left on those arms will teams desperate for pitching come calling for Milton/Estes? Estes is currently leading the PCL in FIP and has yet to allow a home run.

Chattanooga Lookouts:
We had a Tony Abreu sighting as he tries to restart a career that saw him starting for the Dodgers as a 3rd baseman at the tender age of 22 back in 2007 on May 22nd. Since July 17th of 2007 he's battled one injury after another and has probably been forgotten by most Dodger fans.  On the depth chart he's now behind DeWitt and probably DeJesus but I still like the guy if he can get healthy for an extended period of time. Travis Schlichting went into spring training this year with a chance to make the major league roster but a bad back shut him down before he even got started. He finally made his way back to the mound last night and the results were very encouraging as he retired all eight batters he faced. A little surprising he went 2 2/3 in his first action of the year so he must have been airing it out in extended spring training. Josh Bell has been very quiet lately going 7/32 in his last ten games. If Lambo pulls another ofer he will fall below .300 as he's gone 4/22.

Inland Empire 66ers
Slugfest in the desert as High Desert put up a seven spot in the eight inning defeat the 66ers 16 - 13. Bastardo and Rondon were the main culprits of the onslaught. The first six hitters in the 66er lineup had 15 hits with Trevon Robinson, E Perez, and Steven Caseras getting 3 hits a piece. Pedro Baez has finally shown up again. He started playing again on April 30th after not playing for 14 days. The night before was a different type of game as Justin Orenduff picked up an extra inning win 3 -2. Tim Sexton pitched eight brilliant innings and was followed by Miller and Orenduff. Miller appeared Monday/Tuesday getting one hitter each time so he's able to go back to back. He's now been in 12 games and only pitched 4 innings. One wonders what they are trying to do with him as they appear to have a plan of limiting him to one or two batters an appearance.

Great Lake Loons
Loons lose 2nd in a row 8/7 as Justin Miller keeps scuffling after his decent debut start with his 4th straight  sub par effort.  Jordan Pratt is a strange case. He has always had excellent dominance but also has the worse command in the system. Last year he  struck out 80 batters in only 69 innings but that was tempered with his 68 walks. A week ago last night he walked seven batters in two innings and you just wondered what the hell is going on. Then he turns it around on an dime and in his last two appearances he has struck out 10 of the last 15 batters he has faced with nary a walk. Go figure.  Javy Guerra finally proved mortal blowing the save and the game for the first time this year.  Kyle Russel, Pedroza, Delmonico, and Gordon continue to lead the offense as the group combined to get on base 14 times. Gordon not only collected two more hits but also walked twice. Pedroza  and Delmonico did that one better as they each collected three walks. Not surprising they are 1 and 2 in OBP for the Midwest League. Dee Gordon swiped three bags to give him 12 for the year and league lead. After several years of being one of the worse offenses in the league, the Loons are going loopy with offense this year. Part of that is the older players in the league like Pedroza, Russell, and Delmonico who should dominate but only Russell was what you would consider a high draft choice and none are older then 22 at this moment.  Gordon the highest ranked prospect has just gone bonkers. One wonders how long they are going to let them tear up the league.