Tonight the Dodgers set a modern major league record for home wins to start a season. After beating the Nationals 10-3 the Dodgers are now 13-0 at Dodger Stadium and 21-8 on the season. At home the Dodgers are batting .320 and they have a 2.44 ERA.

Clayton Kershaw (1-2) got the win, although he had to battle just to get through five innings. He finished with five strikeouts, three walks, and four hits but only one earned run. The Nats did strand six baerunners in his five innings though and he also walked Daniel Cabrera, who was 0-22 with 20 strikeouts in his career entering the game. James McDonald added a scoreless 1-2-3 inning in the 6th, and Guillermo Mota gave up two runs in his two innings. Brent Leach got a strikeout to end the game and finish off an impressive major league debut.

On offense the Dodgers were just as frustrating through the first five innings. They only got one run after loading the bases with nobody out in the first, and failed to score with runners on second and third and one out in the second. In the fifth Kershaw was mysteriously left in to hit even though he wouldn't pitch again in the game. He was thrown out at home on a dropped popup on a bad baserunning play which allowed the Nationals to escape another huge jam only down 2-1.

But everything unraveled for the Nats in the bottom of the sixth. The Dodgers' at bats went as such: Single, lineout, walk, walk, single, walk, double, walk, single, groundout, groundout. By that time they were up 9-1 and would coast to a 10-3 win.

Rafael Furcal and Russell Martin each had three hits, and Orlando Hudson went 2-3 with two walks and a double. Manny Ramirez had a two-run double and a walk, and James Loney also added two hits and two RBI's. The bats were really on fire tonight.Even though the Dodgers scored ten runs and hit into two double plays, they stlll left nine men on base. They got on base in 21 of their 43 plate appearances.

Here's the win probability chart for the game. Nothing too exciting, though it was an interesting game for awhile: 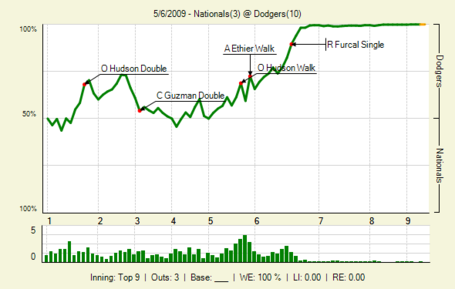 There's still no timetable for Hiroki Kuroda or Hong-Chih Kuo's return. Trainer Stan Conte had some pretty great things to say about Kuo, "People don't know how tough he is. What he's been through, coming in at 11 in the morning to pitch an inning. This guy is a pretty incredible person to go through that. It's our responsibility from doing too much. He'd go out with two bloody stumps. I wouldn't expect him to be out a long time, but I can't tell a timetable".

Tomorrow at 7:05 PM the Dodgers will look for their third straight sweep and eighth win in a row in the finale against the Nationals. Randy Wolf will be taking on Jordan Zimmerman.