Manny Ramirez's Suspension: Perspectives From the Rest of the League

Share All sharing options for: Manny Ramirez's Suspension: Perspectives From the Rest of the League 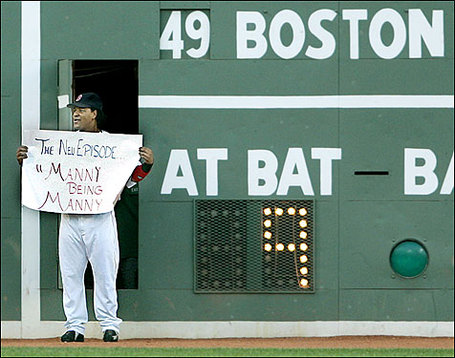 Today Manny Ramirez was suspended for failing a drug test, more specifically for taking HCG (a female fertility drug). We've seen reactions from Dodger executives, bloggers, and fans, but what about the view from the other side of the glass?

At the Giants blog McCovey Chronicles Grant tries to explain the Giants fans' glee in Manny's suspension. He thinks every time a big name is caught using steroids the rest of the baseball world gets one step closer to understanding Giants fans' love of Barry Bonds. This was made because of the original thread which some Dodger fans may find... distasteful.

Diamondbacks fans at AZSnakepit are happy too, but wish this had happened before they played the Dodgers. I'm not sure which is better to them, Manny's suspension or manager Bob Melvin's firing.

Padres fans at Gaslamp Ball don't believe Manny when he says he didn't know the medication he was taking was banned.

Rockies fans at Purple Row think Manny's suspension might be the break they need to get back in the NL West race.

At Red Sox blog Over The Monster there are mixed reactions. Some fans are upset for one of their favorite payers and some are happy for Manny's misfortune.

Yankees fans at Pinstripe Alley are happy that Manny took some of the heat off of A-Rod's steroid problems. As you can imagine they aren't the biggest Manny fans in the world.

Amazin' Avenue's Mets fans are glad that Omar Minaya decided not to pursue Manny Ramirez this past winter.

Over at Beyond The Boxscore they have a amusing graph of what percentage of baseball people prefer Juan Pierre over Manny Ramirez.