A Manny Ramirez Suspension Bridge To Dodgers Past

Share All sharing options for: A Manny Ramirez Suspension Bridge To Dodgers Past 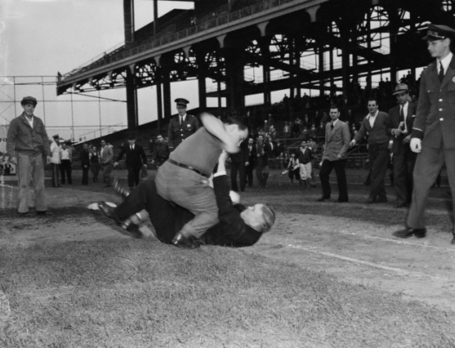 Manny Ramirez getting suspended yesterday for a failed drug test certainly sent shockwaves throughout Dodgertown and all of baseball.  However, it's not the first time a Dodger has been suspended, nor will it be the last.  Here's a look of some notable suspensions in Dodger history:

Not only was Dodger manager Leo Durocher suspended for the entire 1947 season for associating with known gamblers, but he was also suspended briefly in 1940 while, as a player, he incited a riot.  That led to the classic picture above of a Brooklyn fan beating umpire George Magerkurth.

After winning rookie of the year in 1980 and playing a large role in the Dodgers' 1981 World Series win, Howe dabled with cocaine and started his downward spiral.  He was suspended by Commissioner Bowie Kuhn for the entire 1984 season, and would be suspended a total of seven times in his career, the final blow being banned for life in 1992. 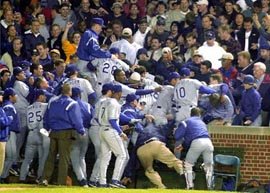 When a fan near the Dodger bullpen grabbed Chad Kreuter's cap during an argument on May 17, 2000, that ignited an already heated argument to a full-scale donnybrook, resulting in 19 Dodgers getting suspended for a total of 84 games.  Kreuter, along with coaches Glenn Hoffman, Rick Dempsey, and John Shelby, all were suspended for eight games each.

Speaking of going into the stands, Reggie Smith in 1981 decided to give a fan at Candlestick Park a piece of his mind, and a piece of his fists.  Smith was suspended for five games.  The LA Times reflected on the incident, noting "the fan, Michael B. Dooley of Redwood City, suffered a sprained wrist, three broken ribs and a couple of broken knuckles in the altercation." 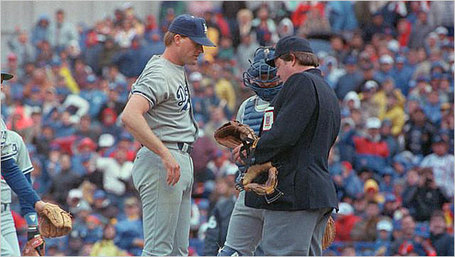 Howell, who was ejected in the eighth inning of Game 3 of the 1988 NLCS for having pine tar in his glove, was suspended for three games, a huge relative total during the playoffs.  Manager Tommy Lasorda complained, "It costs us our best relief pitcher, and it's too severe. The Mets have the best team in the league, to begin with. Now, I've got to go with 23 guys against their 24."  Things turned out alright for that Dodger team, however.

The current Dodger pitching coach was a member of the Mariners in 1980 when he was caught with a thumbtack taped to a finger of his gloved hand.  Honeycutt was suspended for ten games.

After taking a curve ball from David Cone off his helmet in a May 1988 game, Guerrero hurled his bat at the Met's pitcher.  Guerrero got a four-game suspension, and within three months he was traded to the Cardinals.

Speaking of throwing bats, Dave Anderson recalls an incident in Brooklyn for which Furillo wasn't suspended:

[Furillo] had subtly let his bat slide out of his hands while swinging at a pitch. The spinning bat bounced in front of the mound and skidded over it as Maglie skipped out of its way. Furillo slowly began walking toward the mound. But before he got very far, he was restrained.

''My bat slipped,'' he explained later.

''But why did you start to walk out toward the mound?''

Perhaps the most embarrassing suspension in Dodger history, Vladimir's older little brother used a cork bat in a 1997 game against the Cardinals.  Guerrero was caught partly because he rushed to pick up the pieces of a broken bat, rather than let the batboy take care of it.  Guerrero was suspended for eight games, and sadly the corked bat never helped as he ended up with an 83 OPS+ as a Dodger.

I'm sure I have missed a few important supensions.  Feel free to list your favorites in the comments.