Russell Martin is on the Board, Dodgers Win 6-4

Share All sharing options for: Russell Martin is on the Board, Dodgers Win 6-4

The Dodgers defeated the Angels 6-4, evening up the series at a game apiece. Jeff Weaver won the battle of the Weavers as he bested his brother by going 5 innings and allowing 2 run on 6 hits with 0 walks and 4 strikeouts. Jered Weaver went 5.1 innings but allowed 6 runs on 10 hits, 3 walks and 4 strikeouts. Jeff Weaver was the first Dodger starter not named Chad Billingsley to get a win in June. He only threw 66 pitches as well, so he could have gone longer had Joe Torre not had such a quick trigger finger. Weaver did a great job taking advantage of his spot start.

Of perhaps even greater importance, Russell Martin seems to finally be breaking out of his season long slump. He crushed a homerun to left field, his first of the season, and added two more hits as well. It would be a huge lift to the team if Martin can turn things around and start producing like everybody know he can.

The rest of the lineup was just as eager to contribute to the offensive attack. Everyone had a hit except Rafael Furcal, but he walked three times. Andre Ethier had a 2 RBi triple, Juan Pierre went 2-4, and Matt Kemp went 2-3 with a walk and a stolen base. Kemp continues to prove that he is an All-Star caliber player and hopefully that will start to carry over into the lineup card as well; Kemp batted 9th today. Please note that Kemp is currently first among all centerfielders in WAR (wins above replacement).

The bullpen pitched well for the most part. Ronald Belisario went 1.2 innings and recorded 5 strikeouts without allowing a run. Then came Ramon Troncoso, who went 1.1 innings and gave up only 1 walk and 0 runs with 1 strikeout. Jonathan Broxton almost finished the game unscathed but gave up a two-run homerun to Gary Matthews Jr. with 2 outs in the 9th inning. This proved that Broxton is mortal but had no effect on the outcome of the game. Here's the win probability chart for the game: 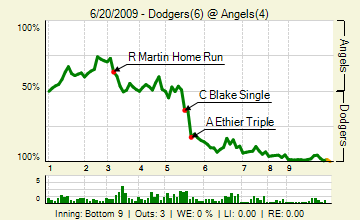