Share All sharing options for: The Walk-Off King Strikes Again

Andre Ethier is amazing. Period. For the fourth time this season Ethier ended a game with a walk-off hit. This was also Ethier's seventh walk-off hit since the start of the 2008 season, the most in the majors in that timespan. Ethier's home run was his 15th of the season, leading the Dodgers. He has 14 home runs at home this year, behind only Albert Pujols who has 15.

The Dodgers as a team have had a flair for the dramatic this season. The game started slow; it was scoreless until the fifth inning when Ryan Spilborghs hit a two run homer. The Dodgers followed suit by scoring two runs in the bottom half of the inning, although their method was less conventional. Matt Kemp was on second with two men out so Rockies starter Ubaldo Jimenez intentionally walked Russell Martin to pitch to Randy Wolf. Wolf induced a balk out of Jimenez and then hit a groundball to right field that scored both Kemp and Martin to tie the game.

The game stayed tied but each team had plenty of opportunities to go ahead. The Dodgers got the lead-off man on in the 8th, 9th, and 10th innings but they were stranded each time. They also stranded runners in scoring position in both the 7th and 12th innings.

Ronald Belisario, Ramon Troncoso, and Jonathan Broxton each pitched an inning an combined to record six strikeouts and only allowed one baserunner. However, in the 10th inning Jeff Weaver allowed two straight hits to put runners on the corners with nobody out. With the expectations at a minimum, Weaver proceeded to strike out the side to get out of a huge jam. Brent Leach, Guillermo Mota, and James McDonald pitched a scoreless inning each before the fateful bottom of the 13th began. All in all, the Dodger bullpen combined to pitch 7 scoreless innings with with 13 strikeouts while allowing only 2 hits and 1 walk. The bullpen has only allowed 2 runs in their last 23 innings spanning across 5 games.

In the bottom of the 13th Casey Blake led off with a line drive single to right field. Then Andre Ethier stepped up to the plate, toyed with reliever Joel Peralta for a few pitches, and finally got bored and decided to smash a home run to right field to end the game. This was the Dodgers ninth walk-off win of the season, the most in the majors. They had eight walk-off wins all of last year.

Randy Wolf got another no-decision, his eleventh of the year in only seventeen starts. Also of note, Juan Pierre had a terrific game, doing everything he could to get the Dodgers another run. He went 3-5 with a walk and also had 3 stolen bases. This was the first time he has had 3 steals in a game since June 29, 2007.

Here's the wild and crazy win probability chart for the game: 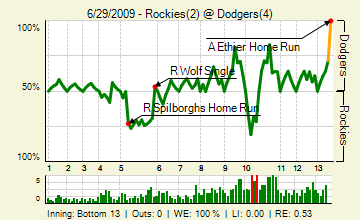 This game had to be deflating for the Rockies, who had won 20 of their last 23 games but fell to 1-9 against the Dodgers this season with the loss. This was probably their best chance at winning a game this series and now have to face our two young stud pitchers the next two days.

Manny Ramirez had his fifth and final rehabilitation game today. Manny was 1-3 with an infield single and 2 K's in the game. After the game he declined to speak to reporters, saying, "No, thank you. Go to YouTube."  Manny's first with the Dodgers will be on Friday against the Padres at Petco Park.

Tommorow the Dodgers will face the Rockies again at 7:10 PM, with Chad Billingsley taking on Jason Marquis. A win would give the Dodgers the series victory and ensure they keep their streaking division foe at bay.