Matt Kemp led a comeback, peck-away rally by the Dodgers, who overcame an early 3-0 deficit to best the Astros, 4-3 in the finale of a four-game series at Dodger Stadium.  Kemp scored twice on a pair of Brad Ausmus doubles, and scored again on an error by Houston reliever Alberto Arias in the seventh inning to tie the game.  Then, The Bison crushed a pitch by LaTroy Hawkins into the left field pavilion in the eighth to give the Dodgers their first lead of the game.  Kemp's four runs scored represent a new career high, and he also homered and stole a base in the same game for the second time this season.  Manager Joe Torre was pleased with his center fielder:

It was a heck of a day.  He had a great day.  Obviously we needed every bit of it and the way the bullpen pitched, they came out and just shut everybody down.

Jonathan Broxton, one day after what Joe Torre called a "rusty" performance, looked more like his usual dominant self, striking out Michael Bourn and Jeff Keppinger before inducing a pop out from Miguel Tejada to end the game.

Hiroki Kuroda was shaky, pitching out of trouble seemingly all game.  He allowed three runs in the third inning, the last two coming on a Geoff Blum home run into the Astro bullpen.  However, Kuroda lasted through five innings, throwing 92 pitches.

Guillermo Mota, who has been very good for two solid months, provided another solid performance with two scoreless innings, providing the bridge to Ramon Troncoso and Broxton.  In all, the Dodger bullpen pitched four hitless innings today while striking out five batters.

There were a pair of injuries today, but neither seem to be serious.  Andre Ethier fouled a ball off his foot, but managed to stay in the game and collect two more hits.  Orlando Hudson, however, injured his left wrist when he collided with Russ Ortiz at first base while grounding out to end the fifth inning.  Torre downplayed the severity of Hudson's ailment:

We'll get a better read tomorrow.  It doesn't seem to be anything.  I don't want to say a major problem because when it hurts its a problem, but its something he's had before and we've sat him down for a day or so.

The Dodgers open up a series with Cincinnati tomorrow night, and Jason Schmidt will be on the mound for the first time in over two years.  Torre is optimistic about Schmidt:

Once he gets into the flow of the game, you're going to see the same guy he always was, without the velocity he once had.  He knows how to pitch, and he certainly knows how to handle all of that stuff.  He's been throwing 100 pitches, so I think we'll watch him and we'll just see how comfortable it looks and if he gets in trouble in a few innings, that will take something out of him.  But again, that's only something we can determine after we watch him.

It is unknown what roster moves will be made to accommodate Schmidt, and possibly the return of Hong-Chih Kuo as well.  A likely candidate to be sent down to create room on the 25-man roster is Blake DeWitt, who has been optioned four times already this season.  However, the severity of Hudson's injury may impact that.  Torre said he plans to meet with General Manager Ned Colletti tonight to discuss the moves to be made.

Here is the win expectancy graph of today's game, courtesy of Fangraphs: 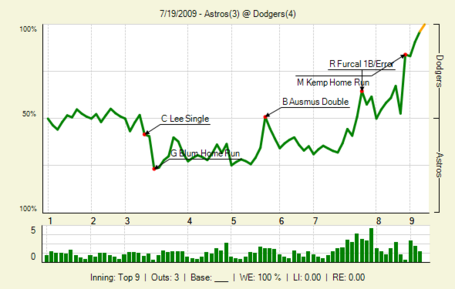