Friday is the day we have all circled on our calendars for months, the return of Manny Ramirez from his 50-game suspension.  The entire baseball world will descend upon San Diego to view Manny's first game back.  Many Dodger fans will make the two-hour trip south to Petco Park, to root for their favorite team.  In fact, True Blue LA will roll 20 deep in the AM/PM All You Can Eat Section in right field (section 227, rows 10-14 if you want to say hello).

Cheering for Manny doesn't condone steroid use.  We just want the Dodgers to do well, and Manny Ramirez will help them in that regard.  Its as simple as that.  Manny, and the Dodgers, paid a price for his transgressions.  Manny lost about $6.8 million in salary, and he probably won't be elected to the Hall of Fame for quite a long time, if ever.  The Dodgers lost their best player for nearly a third of the season (and did amazingly well, thank you very much).  But, for now, the price has been paid.  Its time to move on.

I'm conflicted about this.  I have enjoyed Manny Ramirez for years, even before he came to the Dodgers, because he always seemed to be having fun on the baseball field, and he just seemed like a quirky guy.  He elevated the Dodgers last year to the precipice of the World Series, and I loved him for it.  On the other hand, he screwed up.  On some level, we all want our favorite players, on our team to be clean.  I want to be able to stand up and cheer for a player that I believe is a good guy.

In the end, however, the bottom line is what happens on the field, not off.  None of us know these players personally, and I'm sure despite any type of boyhood dream, none of us would want to.  Rafael Furcal has two DUIs on his record.  Yet I cheer for him all the time.  Is that wrong?  I don't know, but it seems to me Furcal already paid his price for those transgressions.

Manny has paid his freight, and now is ready to come back.  How do we handle this, as fans?  I suggest we give him the "Major League" treatment.  Allow me to set the scene:

We are Roger Dorn.  For years, we took our relationship with baseball for granted.  We saw all these inflated home runs totals, and turned a blind eye toward the burgeoning steroid problem in the game.  By neglecting the problem, we helped baseball, our love, get hurt.  As a result, baseball got back at us by getting one of our own...

Manny Ramirez is Rick Vaughn.  He is the one all the fans stand up and shout for, the guy I can't really imagine being dressed in a suit.  He was doing something he shouldn't have, and got caught with his hand in the cookie jar.  He was unaware of the potential problems it would cause for us, Roger Dorn the fans.

The role of Duke Temple will be played by Steve Yeager.

Manny has been off hiding in the bullpen for seven weeks, avoiding us every chance he gets.  His appearance is about to happen, and somewhere off in the distance we can hear Journey singing "Don't Stop Believin'."

99% of the Dodger blogosphere will play the role of owner Rachel Phelps, as they chime in with, "I hate that fucking song." 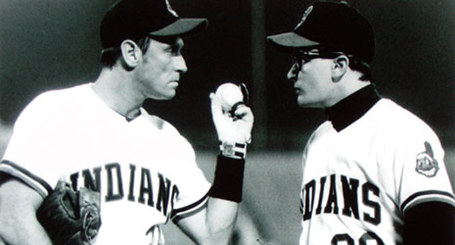 Just before our reunion with Manny tomorrow, we call time out.  We walk over to him, and utter these words:  "I only got one thing to say to you, Manny.  Hit this [ball] out!"  Then we walk away as Manny gets a relieved, yet knowing smirk on his face.

Manny crushes the ball, well over the fence at Petco, and perhaps even takes his bat with him around the bases.  I wouldn't put it past him.

That's about as far as I would go.  I don't suggest punching Manny in the face as we are celebrating afterwards before picking him back up.   Now, if you'll excuse me, I'm going to go find 1989 Rene Russo.  Hopefully, she will tell me to root for Manny Ramirez because he will help the Dodgers win.