Share All sharing options for: Dodgers Come Up Empty In St. Louis, 10-0

Have you ever seen one of those Food Network Challenge shows on cakes?  Contestants bake these elaborate cakes, with all sorts of colors, designs, and crazy shapes.  It is a rare combination of food and art, and the results are often spectacular. 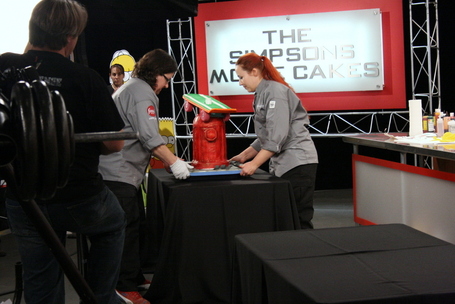 Tonight, Chad Billingsley was baking one of those cakes.  Through the first five innings, his main ingredient was control.  Sixteen of the first 18 batters were welcomed with a first pitch strike, and many Cardinal hitters were down 0-2 before they knew what hit them.  Billingsley didn't just pound the strike zone; he kneaded it. And the Dodgers needed Billingsley to throw zeroes, because they once again peppered the field with base hits but none could bring a run across.

Through five innings, the game was scoreless, and Billingsley's masterpiece was baking quite nicely.  He only threw 59 pitches while allowing one hit and two walks, and it was looking more and more like Bills was going to pitch deep into this game.  This was essentially the point in the competition where Billingsley needed to deliver his masterpiece to the judges.

Cue judge Bill Plaschke, was awakened from his stupor -- maybe he was practicing yelling into a camera -- to Tweet this, entering the bottom of the sixth inning:

Billingsley needs to get through this seventh inning in st. louis...needs to show he can be an ace, in case dodgers can't get one..

Ever attentive to detail, Plaschke threw down the gauntlet to Billingsley:  get through the sixth inning, or you are not an ace.  Never mind the entire body of work; the mythical "ace" status depended on this one inning!  What is an ace, you ask?  That is a word that will drive people crazy.  Nobody can define it, and everyone -- including me -- will mold the word to fit their definition.

Anyway, back to the game.  Billingsley's sixth inning was the point in the contest where he had to carry his masterpiece to the judges.  As is sometimes the case, that cake slipped from his grasp and fell crashing to the floor.

Faced with adversity -- in this case the four-strike walk to Albert Pujols and the inning-ending caught stealing negated by a ball four call -- Billingsley simply couldn't get out of his own way.  Whereas earlier in the game Dodger ground balls found Cardinal gloves, in the sixth inning the Cardinals simply found all the holes.  Three hits and four walks (two intentional) later, the Cardinals exploded for six runs, ending Billingsley's night and effectively ending the game.

I learned a valuable lesson today:  when you write about a 25-year old game that the Dodgers won 10-0, don't be surprised for the Cardinals to return the favor that very night.

The game was so out of hand that Joe Torre did not want to use any more of his pitchers, so he called on infielder Mark Loretta to get the final out in the eighth inning.  That is right:  on a team with 13 pitchers, the Dodgers used an infielder to pitch tonight.  At least the game became more noteworthy.

It was also noteworthy because the Dodgers actually outhit the Cards, 9-8.  This was the first time the Dodgers have outhit an opponent and lost by 10 or more runs since April 24, 1958 against the Cubs.

Tonight was a night to remember that the game represented a mere 0.6% of the schedule.  Its a long season.

This is a crazy week, with the trade deadline providing a boon for the pitchfork and torch industry.  The Dodgers will almost certainly add a pitcher or two over the next few days.  There are a lot of rumors out there...some credible, but almost all baseless, and no reason to get worked up.  I am certain of this: No matter who the Dodgers acquire, they won't trade Chad Billingsley, and they won't trade tomorrow's starter Clayton Kershaw.  If you hear otherwise, don't believe it.

Now that the Dodgers have finally lost three games in a row, I think for perspective we can turn to Judge Smails:

It's easy to grin, when your ship comes in, and you've got the stock market beat. But the man worthwhile, is the man who can smile, when his shorts are too tight in the seat.

Back to the grind tomorrow night:  Kershaw vs. Joel Pineiro.