The Dodgers beat the Padres 6-3 in Manny Ramirez's first game since May 6th against the Nationals. Manny's 50 game suspension seemed like forever but watching him step into the batter's box against Chad Gaudin in the first inning was quite a thrill, bringing the fans at Petco Park to their feet. The cheers overrode the boos and it seemed more like a home game than an away game.

Manny's first game back was quiet, he went 0-3 with a walk. In his first at bat Manny worked the count well and fouled off a few pitches until he finally drew a walk. But in all of his other at bats he only made weak contact. The game was similiarly quiet except for a stellar offensive perormance by the Dodgers in the top half of the first inning. Here's how the first inning went:

Chad Gaudin threw a total of 46 pitches in the first inning, allowing 5 runs on 4 hits and 2 walks. And that was enough for the Dodgers to win. Andre Ethier doubled in the 3rd inning and eventually scored on a Russell Martin groundout to put the Dodgers up 6-0. Scott Hairston hit a solo home run in the 4th inning to put the Padres on the board. In the 6th inning, Adrian Gonzalez added a two-run double to knock Hiroki Kuroda out of the game and bring the score to but 6-3 but the Padres couldn't find any more offense. The Dodger bullpen pitched spectacularly, with Guillermo Mota, Ramon Troncoso, Brent Leach, and Jonathan Broxton pitching 3.2 scoreless innings, allowing only one baserunner in the process. Broxton pitched the 9th and had 2 strikeouts on only 10 pitches to record his 20th save of the season. Here is the win probability chart for the game: 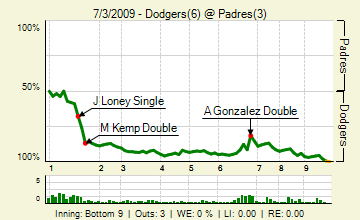 The game was in hand before many fans even got to their seats. The Pades never had so much as a 20% chance of winning once Matt Kemp hit the two-run double that put the Dodgers up 5-0 in the first inning.

The player of the game had to be Rafael Furcal, who went 4-5 with a double and a run. Also of note were Russell Martin, who went 2-4 with a run and 2 RBI's, and Matt Kemp, who went 1-3 with the aforementioned RBI double and a walk. On the other side of the coin was the slumping Orlando Hudson, who went 0-5 with 3 strikeouts. Hudson is only 1 for his last 26, with no walks or extra base hits and 8 strikeouts in that timespan. His 2009 OPS of .775 is now below his career OPS of .778.

Tommorow Randy Wolf will take the mound against Josh Geer at 1:10 PM. Look for Eric's pictures from the True Blue outing at Petco Park sometime in the morning. Here's the roll call for tonight's game thread: