Dodgers Week 13 In Review: Back At Full Strength

Share All sharing options for: Dodgers Week 13 In Review: Back At Full Strength

The number 13 was anything but unlucky for the Dodgers this week, as they rode great pitching and some late inning heroics -- not to mention a dash of Manny Ramirez -- to overcome any Triskaidekaphobia.  The Dodgers fittingly played a pair of 13-inning games during the week, and won them both with late home runs.

The offense was still largely ineffective (3.67 runs per game), particularly Orlando Hudson (0 for 16 this week, and mired in an 0 for 22 streak) and Mark Loretta (0 for 7), but the Dodgers rode their pitchers to post yet another winning week, their 11th week with a winning record this season.

Manny Ramirez returned from his 50-game suspension -- True Blue LA was there, along with seemingly 30,000 other Dodger fans for game #1 on Friday -- but has been eased back in so far.  Ramirez has played only six innings in the field in each of his first two games, and didn't start Sunday, although he did have a pinch-hitting appearance later in the game.

Dodger Batter of the Week:  Rafael Furcal had a nice comeback week -- his four hits and a steal on Friday night were particularly encouraging -- but this week's award goes to James Loney, who ended his good week with a game-winning home run in San Diego in the 13th inning on Sunday.  Loney hit .308/.384/.475 for the week, leading the club with a .863 OPS.

Dodger Pitcher of the Week:  The Dodgers had a stellar week from their starters (2.84 ERA, 0.868 WHIP), even though they only had one win to show for it (in the worst start of the week, by Hiroki Kuroda), but this award goes to Jeff Weaver, who had two scoreless outings, both in high-leverage situations in extra innings.  On Monday against Colorado, Weaver allowed a pair of baserunners to start the 10th inning, but came back to strike out the next three batters, preserving the tie in a game Andre Ethier would later end in the Dodgers' favor.  Then, on Sunday, Weaver came to the rescue with three hitless innings, allowing only an intentional walk to Adrian Gonzalez (with the bases empty!), to pick up the win.

Weird Play of the Week:  Trailing 2-0 on Monday against the Rockies with runners on first and second in the bottom of the fifth, Randy Wolf tried to call time while batting.  Colorado starter Ubaldo Jimenez was distracted and stopped mid-delivery, even though the home plate umpire Bruce Dreckman never actually called time out.  A balk was called, moving both Russell Martin and Matt Kemp into scoring position.  Later in the at-bat, Wolf singled to right field, scoring both runners and tying a game the Dodgers would eventually win, seven innings later.

Singular Success:  In this last 53 plate appearances, Andre Ethier has five home runs, two doubles, and 11 RBI.  However, during that time Ethier has zero singles.  As a result, Ethier is hitting .149/.226/.511 during that span, and his .737 OPS is about as high as you'll see with a batting average under .150.  Ethier's last single came in the eighth inning in Anaheim against John Lackey...15 days ago.

All Hands On Deck:  On Monday against the Rockies, each of the final seven Dodger pitchers pitched a single scoreless inning.  Over those seven innings, the bullpen allowed only two hits and a walk while striking out 13.  The Dodgers used eight pitchers in a game for only the 13th time since moving to Los Angeles. 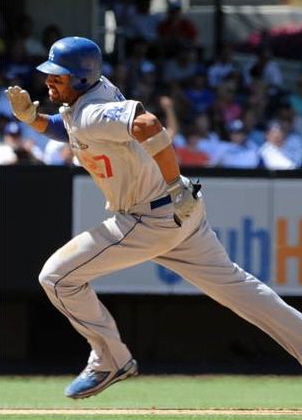 Meet Me in St. Louis: Chad Billingsley, Jonathan Broxton, and Orlando Hudson were all named to the National League All-Star team on Sunday.  It is the first selection for both Billingsley and Broxton.  Hudson was an All-Star while with the Diamondbacks in 2007.  In addition, Matt Kemp is one of five candidates for the final roster spot.  You can vote for The Bison here (vote often!), through Thursday at 1pm.

Power & Speed:  James Loney, in addition to his game-winning home run, had a stolen base on Sunday, his sixth of the season in seven attempts.  Loney is just the second Dodger to have both a homer and a stolen base in the same game this season, joining Matt Kemp, who accomplished the feat at Wrigley Field on the last day of May.

Topsy-Turvy Pen:  Even though each of the top three members of the Dodger bullpen -- Jonathan Broxton, Ramon Troncoso, and Ronald Belisario -- had a rough outing in which they gave up three runs, overall the bullpen had a good week.  Troncoso's three runs Saturday were unearned, but even if you count those as earned runs, the bullpen for the week had a 3.52 ERA and a 0.957 WHIP, with 28 strikeouts in 23 innings.

Transactions:  Quite a few this week:

Upcoming Week:  The Dodgers head into the All-Star break by finishing their nine-game road trip with trips to New York and Milwaukee.  After an off day Monday, the Dodgers get their first view of Citi Field, brand new home of the Mets.