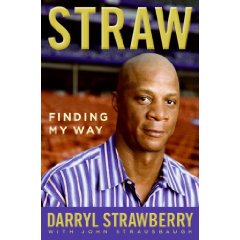 With the Dodgers set to play the Mets for a three game series beginning Tuesday, it is appropriate to review Darryl Strawberry's autobiography, "Straw: Finding My Way" (HarperCollins, 2009).

I hated Darryl Strawberry for years, because he threw away such a promising career, but more importantly, was a tremendous bust with the Dodgers.  Over the years, those feelings have waned, and this book has done what I would have thought impossible 15 years ago:  it made me a fan of Darryl Strawberry again.

I was ecstatic when Strawberry signed with the Dodgers before the 1991 season.  They were acquiring one of the best players in baseball, a player with seven straight All-Star appearances, and a sure fire Hall of Famer.  He had 252 home runs in his first eight seasons, which at the time was the seventh best start in MLB history, just one behind Hank Aaron.  He was a local boy coming home, with a big-time, $20.25 million, five-year contract, and I was prepared for nothing but a success story.

Strawberry didn't disappoint in 1991, putting up a scorching second half in the heat of a pennant race with Atlanta, one eventually won by the Braves.  After that initial season with the Dodgers, however, years of hard living finally caught up with Strawberry.  Over the next two years, he appeared in only 75 games while battling injuries, crack cocaine, and alcoholism, and hit a meek .199/.300/.355, an 83 OPS+.  He was released by the Dodgers in s 1994, with almost two years remaining on the contract.  As Strawberry noted:

The media were really on my case by then.  They wondered if my back was as bad as I was making out.  Maybe I was just malingering and pulling a scam on the Dodgers.  They wondered if the Dodgers had bought a pig in a poke.  They hinted that the team was considering canceling my contract.  I hated them for it, but looking back, who could blame them?

All through '92, '93, I was one bitter, foul soul.  Full of rage and hate, incredibly frustrated, and forced to be idle.  Terrible combination.  I coped the way I always did, slipping deeper and deeper into the alcoholism and drug addiction.  Looking for the next party, the next one-night stand, anything to distract me from myself and my self-inflicted problems.

Throughout the book, Strawberry is open and honest about his transgressions, and he does not shy away from them.  He talks about how he grew up with a father who never loved him, and as a result Strawberry never really loved himself.   He openly talks about once hitting his pregnant girlfriend, among other mistakes, and makes no excuses.

Baseball always came easy to Strawberry, but as he noted:

My problem was I was still trying to figure out the manhood thing on my own.  Because playing baseball doesn't teach you how to be a man.  Baseball isn't life.  It's a game.  Whenever I hear baseball compared to life I have to scratch my head.  Baseball is easy compared life.  There are clear rules and regulations and stats.  It has obvious winners and losers.  The paths and lines are all straight and well-marked.  Life isn't like that at all.  Life is chaos and confusion.  It's much harder to figure out.

He's no hero, but what I like about this book is that Strawberry doesn't claim to be.  The story of his life is still compelling, and is a cautionary tale for many who read it.  Strawberry truly did hit rock bottom, and lived to tell about it.  He seems genuinely happy these days to be living in his own skin, and in the end isn't that what everybody wants?