Share All sharing options for: Dodgers Fall In Extra-Inning Battle

The game remained quiet until the fifth inning when a Freddy Sanchez single plated the Giants first run. After that Pablo Sandoval had a ball thrown at him (I was at the game so I'm not exactly sure what happened, it didn't hit him though) and started walking towards the mound. Benches cleared and players were pushing each other around a bit but surprisingly nobody was ejected. It seemed that at first Sandoval had been ejected as he threw his helmet and walked into the dugout but after temporary manager Ron Wotus came out to argue Sandoval came back up to hit. After Sandoval walked McDonald got one more out before Hong-Chih Kuo came in to pitch. Kuo allowed 2 walks, with the second plating another run to give the Giants a 2-0 lead.

Juan Pierre tripled with one out in the sixth and Rafael Furcal scored him on a groundout to cut the Giants' lead in half. But other than that, the Dodgers were unable to get to Tim Lincecum... that is, until the 9th.

With one out in the ninth inning Rafael Furcal hit an infield single on a ball that he appeared to be out on. This time when Ron Wotus argued the call he was ejected from the game, leaving the managerial duties to third base coach Tim Flannery. Russell Martin then flew out to deep center field allowing Furcal to tag up and go to second base. Down to their last out and with Lincecum at 120 pitches, Andre Ethier hit a liner to right field that scored Furcal to tie the score. Lincecum finally came out and Giants closer Brian Wilson got the last out of the inning.

The Giants threatened in the bottom of the ninth but were unable to score. Pablo Sandoval crushed a ball to left center and wasn't even running because he thought it was gone but it one hopped the wall to keep the game going. Aaron Rowand hit into a double play off of George Sherrill to end the inning.

However, in the 10th inning the Giants finally got their vengence. Guillermo Mota cam in for Sherrill and walked Travis Ishikawa to start the inning. After retiring Randy Winn, Mota got an 0-2 count against Juan Uribe even though he threw two poor breaking balls in a row. Mota's third pitch was a fastball at the letters which Uribe slammed into the left field bleachers to give the Giants a 4-2 win.

It was a disappointing loss for the Dodgers, but overall it was quite an exciting game to attend on a beautiful day in San Francisco. Here's the win probability chart for the game: 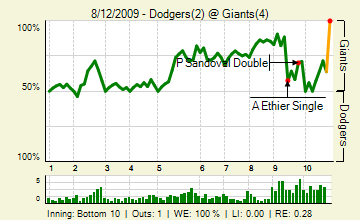 The Dodgers have tommorow off as they travel to Arizona for a three game series against the Diamondbacks. On Friday the series begins with Clayton Kershaw squaring off against Dan Haren.