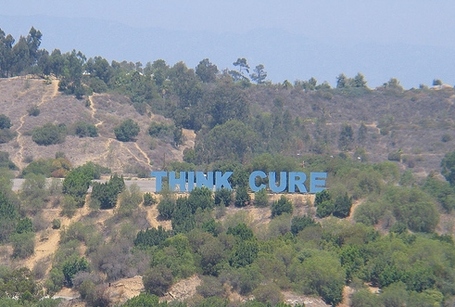 Today is the second annual Think Cure! "Radiotelewebethon," to raise money and awareness for cancer research.  Tune in all day to the following media outlets to follow and/or participate:

In addition, there is an online auction at Dodgers.com/ThunkCure, that runs through Monday, were you can bid on unique experiences involving the Dodgers.

At the stadium tonight, for a donation of $100 or more you can do one of the following:

"ThinkCure! is dedicated to making a difference in the fight against cancer and last year, we started to show what was possible with an annual event like this," said ThinkCure! President Janet Clayton.  "We’ll offer ways in every medium – radio, television and online – for the community to come together and participate in our common fight against cancer. We’ll also have special opportunities for fans who attend those two games on August 21 and 22.  It’s all about doing good while have fun doing it. We know that this event will just get bigger and better every year."

Last month, ThinkCure! awarded $600,000 in grants for research at City of Hope and Childrens Hospital Los Angeles. The one-year grants support research in the development of new therapies to treat brain tumors, gene therapy for lymphoma, and a vaccine for leukemia. The grants were the first research-specific grants awarded by ThinkCure!.

Hiroki Kuroda has announced that he will match the first $25,000 raised in today's telethon with a donation of his own.

Here at True Blue LA, we are doing our part, with the 50-walk challenge, and will donate $100 $200 to Think Cure once all eight regulars have 50 walks.

Fans can make donations to the Dodgers’ official charity online at ThinkCure.org, by calling (866) 554-CURE.