How Good Are Josh Bell and Steven Johnson?

Share All sharing options for: How Good Are Josh Bell and Steven Johnson? 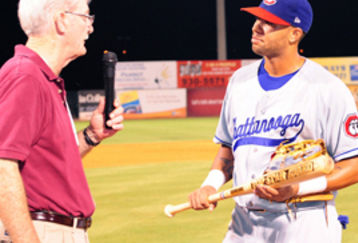 Since the Dodgers acquired set-up man George Sherrill from the Orioles for Josh Bell and Steven Johnson there has been quite a bit of talk over whether the Dodgers gave up too much for him. Sherrill has done his part since coming to L.A., pitching 2.1 scoreless innings with 5 strike outs. But just how good are Josh Bell and Steven Johnson? And how did the Dodgers package compare to the one the Phillies dealt to get Cliff Lee? Luckily, Marc Hulet of Fangraphs has been making a list of the 35 best prospects dealt at the trading deadline.

The top prospect on the list is third baseman Brett Wallace, the centerpiece of the A's haul in return for Matt Holliday. In the second spot there's Aaron Poreda, who was one of the headliners in the Jake Peavy deal. And then in third we have Dodger prospect Josh Bell, one of the players traded for Sherrill. Here's what Hulet has to say about Bell:

Prior to the 2009 season, Bell’s pro career could have been categorized as "promising" but he had yet to put everything together. The former fourth round pick out of a Florida high school has improved by leaps and bounds this season despite making the big jump from high-A to double-A. He also missed more than half of the year in 2008 due to injuries. On the ‘09 season, Bell is currently hitting .296/.386/.494 with 11 homers in 334 at-bats. The 22-year-old has also banged out 30 doubles. Bell’s approach at the plate has certainly improved. After averaging a walk rate of about 8.6 BB% in his first two seasons, that number has improved to about 13.6 BB% in the past two years. His strikeout rate is also down almost 9% over 2008 (29.9 to 21.0 K%). If the Orioles club can find a one-year stopgap for the hot corner in 2010, Bell should be ready to play full-time at the MLB level in 2011.

Clearly Bell's stock has risen quite a bit since the beginning of the season, enough to make him one of the best  propsects traded at the deadline. Bell would have been a good fit to take over third base in 2011 as Casey Blake declines and is forced into a utility role. Although perhaps Blake Dewitt or someone else will be able to fill the role capably.

Anyway, on with the list. Nick Hagadone is #4; Hagadone combined with Justin Masterson to bring Victor Martinez to Beantown. After that we finally get our first Phillie on the list, as Jason Knapp takes the #5 spot. Knapp is a very young pitcher with a very high ceiling, and it sounds like the Indians might have preferred him over someone like Bell according to Hulet:

The Indians were so happy to have the chance to acquire him that the organization took him in the trade even though he was on the disabled list with shoulder fatigue. If Knapp cannot hold up to the rigors of pitching as a starter, he could become a dominating closer with a fastball that creeps up near 100 mph. He also has a power slider and a good changeup.

Obviously Knapp could be really good or could never reach the majors, but maybe the Indians preferred someone like him over the lowered ceiling of Bell.

Tim Alderson is sixth on the list. Alderson was with the Giants until they made the poor decision to trade him straight up for Freddy Sanchez. The we have the next Phillie as Carlos Carrasco takes the #7 spot:

Value-wise, Carrasco peaked as a prospect mid-way through the 2007 season. The right-hander stopped trusting his stuff when he struggled after being promoted to double-A. His formerly plus curveball has regressed to the point where it is an average pitch for him. Carrasco now relies mostly on a low-90s fastball that can touch 95-96 mph and a changeup... With a little more aggression, and if he can regain his plus breaking ball, Carrasco could realize his potential as a No. 2 starter.

Carrasco's ability doesn't quite match his name recognition, but he still has the ability to be a mid-rotation starter at least. He has struggled with the Indians so far though, allowing 9 runs in 13 innings.

Now we scoot down to #9 on the list, catcher Lou Marson. Marson was another piece in the Cliff Lee deal, and here's Hulet's piece on him:

Marson’s value has taken a bit of a hit in 2009. He’s shown that he can consistently hit for average but the right-handed hitter has struggled to hit the ball with authority. Scouts were already knocking the catcher for his lack of power prior to 2009, but his ISO has dropped from .120 in ‘07 to .102 to .076 in ‘09. He’s hit just one homer and 14 doubles this year in 228 at-bats. On the plus side, he continues to get on base via the walk (12.4 BB%) and keeps the strikeouts to a minimum (19.0 K%). With Carlos Santana already established as the catcher of the future in Cleveland, Marson is headed for a back-up role if he’s not traded again.

It does seem a bit odd that the Indians would want Marson as they already have great minor league depth at catcher plus Kelly Shoppach. It could just be an instance of the Indians thinking Marson was undervalued and taking talent over need.

Two spots after Marson is another new Indian, left-handed pitcher Scott Barnes. The Giants traded him to get Ryan Garko, though they probably overpaid. I've seen Barnes at High-A San Jose Giants games and his stuff is pretty impressive. He comes from a three-quarters arm slot but still throws a low 90's heater and a good breaking ball. Three spots after Barnes is the other Dodger prospect dealt in the Sherrill deal, pitcher Steve Johnson:

It’s been a slow climb through the minors for Johnson. The former high school drafted pick has struggled with his command and control throughout his career. He’s also working hard to improve his secondary pitches. Johnson spent the majority of his time in the Dodgers’ system this year at high-A, where he allowed 94 hits in 96.2 innings. He also posted rates of 3.91 BB/9 and 9.50 K/9. Prior to the trade, the right-hander made two double-A starts. His stuff would probably be better coming out of the bullpen (He can occasionally hit 93 mph as a starter), where he could focus on one secondary pitch to go with the heater. His ceiling is that of a set-up man or No. 4 starter.

Johnson is another player whose stock has risen with strong work this year. His ceiling is relatively low though, meaing he won't be an impact player. Johnson has made one start so far with the Orioles and allowed 2 runs in 4 innings with 1 walk and 1 strikeout.

Finally there's Jason Donald, who's all the way down at #20 on the list:

Donald, 24, has followed up his offensive-breakout campaign in 2008 with an injury-filled ‘09 season. An average fielder at shortstop, Donald will likely have to move to second base in the Majors, although the hot corner is an option if he develops more power (which is not expected to happen). He hasn’t looked overly sharp since coming back from his injury.

One might compare Donald to Chin-Lung Hu, although I still think the injuries are hurting his bat more than anything. I'd still take Donald over Johnson, a guy I couldn't see cracking the Dodger rotation, but clearly Hulet doesn't view it that way.

So what do we have? It looks like both the Giants and Dodgers overpaid for the players they got, while the Phillies managed to give up quantity moreso than quality for Cliff Lee. Josh Bell, despite his lack of name-recognition, is maybe the best prospect dealt between the two trades. However, the Phillies package still seems clearly stronger as they have the next three players on the list. Steven Johnson and Jason Donald are the two lower-level prospects dealt, and neither figures to make a big impact at the major league level. The Dodgers probably should have got more for Bell, considering nearly all the prospects ranked around him were dealt for premier players, which Sherrill isn't.

However, Sherrill is a great fit to combat the Phillies in the playoffs, considering Chase Utley, Ryan Howard, and Raul Ibanez are all left-handed. While the Dodgers may have paid too much to acquire him, at least Sherrill can still be a thorn in the Phillies side for the next couple years when the Dodgers will likely be taking them on for a spot in the World Series.